You are here: Home / Parenting Tweens and Beyond / Teaching children to be effective allies – backed social science 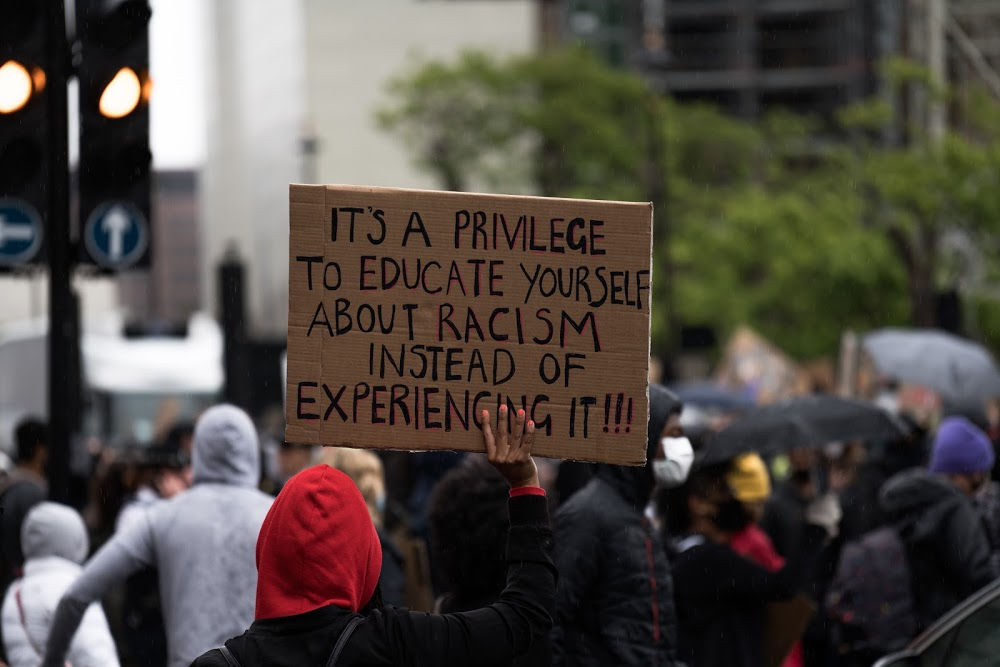 On the first day of winter classes, my husband and three kids joined me on my drive up to university. While I found my seat in a brightly lit, 300-seat theatre, they galavanted between kiosks in the convocation hall. Enjoying all the ‘welcome back’ festivities, they took turns bouncing on a bouncy castle. They splattered acrylic paint on tiles for a mosaic for the student union. And, my three little ones played their version of mini-golf. (That’s where they move each ball close enough to each hole, declaring it a hole-in-one.)

It was one of the last time any of my family was surrounded by hundreds of people. We were blissfully unaware of what 2020 would bring.

As I sat in my lecture hall, the white-haired health psychologist at the front of the room cited study after study. “The number one threat to humankind is not global warming. That’s number two.” From deep in his black leather briefcase, he pulled out a well-used piece of chalk. He slid the whiteboards away and wrote on the chalkboard, declaring we were on the verge of a pandemic. (By my own admission, I thought “verge” meant years, not weeks.)

Though this particular class covered an area of my disciple that was largely new to me, my other classes were more familiar. During the previous semester, I studied intergroup relations including phenomena such as racism, sexism and income inequality. The following semester, I dove deeper into these topics largely focusing on collective action and allyship.

I had no idea how much my studies would directly relate to the most pressing issues we would face this year.

I will admit, I remain a novice in health psychology and epidemiology. However, I do have a growing understanding of effective allyship.

As tensions rise in comment sections and well-meaning people clash, it is evident that we need to understand more so that we can teach our children and be more effective allies ourselves.

Though I write this article in honour of the Black Lives Matter protests and demonstrations of solidarity across the globe, these ideas about effective allyship are generally applicable to all disadvantaged groups.

(Note: I use this expression not to demean any demographic that is oppressed but because it is the terminology used in research to reference demographics who are subject to unequal treatment.)

A little low down on intergroup relations.

It can be uncomfortable to talk about, but we need to recognize that some people are born into more privilege. In turn, some demographics experience oppression. As sociologist Allan Johnson notes, many “may be put off by words like ‘privilege,’ ‘racism’… and ‘white privilege‘ … One way to avoid such a reaction is not to use such words… [H]owever, if we can’t use the words, we also can’t really talk about what’s going on and what it has to do with us. And that makes it impossible to see what the problems are or how we can make ourselves part of the solution” (1).

Gender, race, religion, socio-economic status, sexual orientation, disability, and neurobiology are all demographics that can impact advantages or disadvantages someone is afforded (1).

What is an ally?

For example, the civil rights movement moved forward, in part, because of white people. Men worked with women to ensure women’s suffrage. And, heterosexual allies rallied with lesbian, gay and bisexual people for marriage equality (2).

Related reading: Why white parents need to talk to their children about privilege

Despite the important role allies can play, help can be problematic.

Though it would be simple to say when people are struggling to help them in any way you can, it isn’t that straight forward.

Helping isn’t benign (3). In societies where independence is highly valued, people who need help can feel they aren’t self-reliant. On top of that, people who offer help, in part, because they want recognition and appreciation (3).

Allyship can go wrong because allies…

We ask you not for an invitation to your rallies and to sit at your tables, we ask you not to save us, but to back us up… or get the hell out of the way.

Knowing this, how can we teach our children to be effective allies?

Start by having conversations with your children often.

When my daughter happened to see the police shooting tear gas into a crowd on TV, she asked why.

I started by explaining that hundreds of years ago, settlers came to Canada and the United States. When they did, they did a number of hurtful things to different groups of people including, but not limited to, First Nations, Native Americans and Black people. I touched on slavery and how there was a civil war. When slavery ended, Black people had no other option than to move into poor neighbourhoods. People still treated them differently. It was very hard for Black people to get good-paying jobs and move out of poor neighbours. In fact, some policies made sure Black people couldn’t live in nice neighbourhoods. There were other awful things that came of this, but one thing is that many police still treat Black people differently. Now, Black people are more likely to be hurt and killed by the police. Protests are everywhere because people all over the world want Black people to be treated fairly. Many police support this. But some police, like those using tear gas, are fighting this.

But we don’t just talk about Black rights…

In age-appropriate terms, we talk about topics such as residential schools and the impact on First Nations, how autistic people see the world differently, and how disabilities may be viewed as negative.

I wasn’t always as deliberate about this, but I’m trying to do better.

Verbalize your support for disadvantaged groups.

It can feel daunting to talk to disadvantaged groups about their hardships. For one, these topics can feel taboo. And, we don’t want to get these conversations wrong and offend anyone. Though there is no guarantee any of us will get it right all the time, research shows that supportive contact has a positive impact on disadvantaged groups. Specifically, one study found that international students, who are prone to discrimination in Australia, were more likely to engage in collective action when they could recall Australian friends who were supportive (3). In turn, first-generation Canadians reported being more likely to engage in collective action when they overheard a confederate speak supportively about their cause (3).

Based on this parents need to express their support for disadvantaged groups and explain to children different ways we can show support.

Related reading: How to raise children who want to do what’s right

Know that how to show support varies on the needs of the disadvantaged group but showing support and solidarity is important.

Too often the burden falls on the disadvantaged group to educate allies. Instead, we can best equip our families by researching and reading about the causes of disadvantaged groups. Though there are a vast number of ways to show support, often the most effective are to:

Promote a great understanding by perspective-taking and reading.

For parents, there are countless blogs, articles, and books that offer insights. Research shows that spontaneous perspective-taking predicted engaging in allyship for the LGB and Black communities respectively (2).

Who Can Our Children Trust?

“Mommy why do they treat people with brown skin different?

As a Black Mother, Parenting is Always Political

The unbelievable grief of black mothers

Dr. Seuss’ Racist Past isn’t – Your Refusal to Have Hard Conversations Is

As an amazon associate, I earn from qualifying purchases. All proceeds from these books will be donated to Black Lives Matter.

So You Want to Talk About Race

Why are all the Black Kids Sitting Together in the Cafeteria

Some excellent children’s books include:

Mama, Did you Hear the News?

A Kids’ Book About Racism

Heart and Soul: The History of America and African Americans

Just Ask: Be Different, Be Brave, Be You!

When God Made You

Recognize and talk about your privilege.

Research shows that allyship is problematic when allies fail to understand their own privilege (3). For example, allies can:

Here is an article I wrote and researched about why we need to talk to children about white privilege.

There is evidence to suggest that colourblindness further marginalizes marginalized groups. The truth is inequality and injustice exist and so do individual, ethnic, cultural, religious, gender, neurological differences just to name a few. Embracing differences is much more powerful than pretending they aren’t there.

A final note about allyship

That misty day at my university seemed like a lifetime ago. We hadn’t gone on lockdown and we also hadn’t seen Black Lives Matter and solidarity protests sweep the globe. Though 2020 has been the heaviest and most uncertain year I have known, it is time to break down oppression and rebuild for inclusivity. One of the biggest ways we can do this is to show meaningful support. Black lives matter and we need more equality now.

Additional reading you may find helpful

Why white parents need to explain privilege to children

How to talk to kids about Black Lives Matter

The best and worst consequences for moral development

How to raise children who want to do what’s right

Previous Post: « The stress-free way to potty train your toddler
Next Post: Stop whining in its tracks with this simple strategy »