You are here: Home / Positive Parenting Strategies / Kids Sharing: This is How to put an end Fighting Over Toys

When battles over toys happen, here is a strategy that will end fights over toys and answer the question about kids sharing.

This summer our front patio has become a place that the neighbour kids congregate. When we’re home, it’s common to have anywhere from two to eight kids outside playing with mine. Whether it’s on the stoop experimenting with craft materials or on the lawn constructing with cardboard, it’s pretty amazing. These children range in age from four to eleven, have different maternal languages and ethnic histories, and are boys and girls.

And yet, when they come together, their play becomes almost instantly symbiotic. Their magic has me spellbound.

On hot days, the hose comes out. And they pull out water guns, the slip and slide, or just drench themselves in the silliest ways they can think up. When they get bored or thunderstorms roll in, I bring a big old box of forgotten toys up from the basement. Then their imaginations continue on uninterrupted.

This summer has been a wonderful one. But, it hasn’t been all peace and love. There have been power struggles too.

[Related reading: These Strategies Will End Power Struggles with Your Strong-Willed Child]

Namely, there have been issues with kids sharing.

With neighbour kids over and with new toys resurfacing, there have been times where my kids have been possessive.

From time to time, their fun will be cut with, “I had that first!”

According to the viral Facebook posts about kids sharing, it’s best not to force kids to share.

When it comes to not forcing kids to share, they’re right.

In the study,  Patterns of child-rearing, researchers found that when parents took away toys, a privilege or forced their children to do something, these kids were less likely to show the desire to cooperate with their parents’ rules than when reasoning was used.

All of this makes sense. However, these viral posts are about playing at the playground. In them, they say asking a kid to share his toy is the equivalent of letting a stranger play with your iPhone. I’m not overly concerned with playground sharing. We tend not to bring items to the playground we have the intention of using with everyone. (Think plastic beach toys bought at the dollar store, not a $1000 electronic or a favourite toy).

When their friends are over, I want my kids to be motivated to share. And using reasoning in the moment did not accomplish anything. 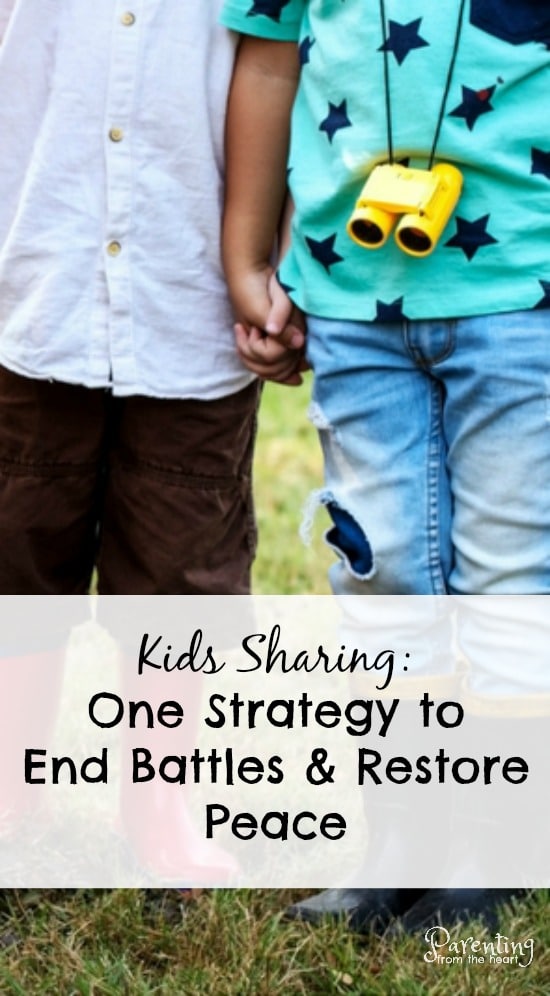 Kids sharing: Why it’s so hard for young kids.

Interestingly enough, studies have found that children as young as three-years-old understand that sharing is fair and desirable. When asked hypothetically whether or not they should share, children expressed that they should, in fact, share. However, when faced with situations similar to the hypothetical situation in the context of play, children under seven years-old struggled to do so.

In another study, when asked about whether or not a third party should share, preschoolers responded it is fair to split resources evenly. When asked if they would equally share their own resources, the preschoolers wanted to keep all of them to themselves.

Researchers have identified this disconnect as a self-interest bias. Developmental psychologists found that with age, children give more weight to what is expected socially rather on their own desires. And, as a result, the self-interest bias gets a back seat.

This gives us context and helps us understand why it’s just so darn hard for our kids to share. But, it doesn’t solve the problem.

One strategy that greatly helps with power struggles and kids sharing is this.

When the kids under my watch fight over toys, I’ve resorted to trial and error. And there was a whole lot of error that preceded my success. I tried to use reasoning. It didn’t work. I used timers. I would set a timer for five minutes for the first child to use an item. Then set the timer for five minutes for the second child to use the item. And then, the toy would go back to the first for five minutes until they mutually got tired of this imposed structure. Like the study suggested, forcing a child to adhere to this sharing schedule got me nowhere. All it did was had me more involved and had two less than happy children.

Then, somehow I decided to give this one technique a try. When a child comes to me, saying, “He has my toy. I wanted to play with it,” I do this. I tell the child, whether it’s one of my kids or one of the neighbours, to ask the other child, “When you’re done, can I have that?” So far, the other child always responds, “Yes.” Not only that, but the child with the toy tends to remember to give it to the child who wants it.

I love this approach to kids sharing because it empowers the child who is upset to express herself.

And, it doesn’t impede on the other child’s fun. Both know that they can have the toy for as long as they want. They just need to wait.

Also, it mimics real life. If I’m at the gym and all the treadmills are in use, I need to wait my turn. If my regular table is taken at Starbucks, I can’t yell at the guy who chose my window seat. I need to wait till he’s done or find another place to sit.

So far, this technique has worked every time. It doesn’t matter if it’s a power struggle between my two kids or one of them and a neighbour or two neighbours. This strategy has dissipated tensions and resolved the conflict at hand.

I hope it helps you too!

For more great ideas like this, check out these posts below.

Previous Post: « Solar System Worksheets: Free printables for preschoolers and older kids too!
Next Post: After-School Meltdowns: Practical Strategies to Get Ahead of Crying and Whining »