You are here: Home / Life Lessons / The Mistake I’ve Made Parenting My Strong-Willed, Independent Child

Because I was a strong-willed, independent child myself, I thought I was parenting my strong-willed child right. Here’s what I learned was doing wrong.

For 8 months now, I’ve been parenting a two-year-old and a three-year-old. Two under two has nothing on the phase of “No! I do it by myself.” And all the crying that comes with not necessarily being able to do so.

Really, all it took was being on the verge of their respective second birthdays and both of my kids started acting like full-blown toddlers. Their desire to be independent took precedence above all else.

I mean who needs one’s dignity when you can throw yourself on the cement floor of Costco and flail to prove your point?

If there were bonus points for determination and being strong-willed, my kids would be winning in spades. Instead, they have a mother who is eternally grateful to the good Lord above that there is such thing as an early bedtime and wine at the end of the night.

Despite wanting to be in control of everything, my two-year-old son likes being really close to his mama. At home, he often holds my hand and throughout the day wants to snuggle. Any event that takes him away from me makes him “miss mama so much.” In contrast, my daughter is more inclined to say “I need space!”

An early crawler, walker and talker, I noticed quickly there was no dust that settled on my oldest child. When we started attending an early learning centre when my son was three-months-old and she was 18-months, she was rarely near me. I would barely have the chance to take her jacket, and she would be off. Moving through each centre at such a rapid rate, I had no clue if she was gaining anything from our attendance.

When the time for preschool rolled around, I knew she was ready, but I wasn’t entirely. Mere moments after entering the cloakroom on her first day of school, she noticed a little girl crying because she missed her mommy. My daughter sat down beside her, asked to be her friend, and waved me goodbye. 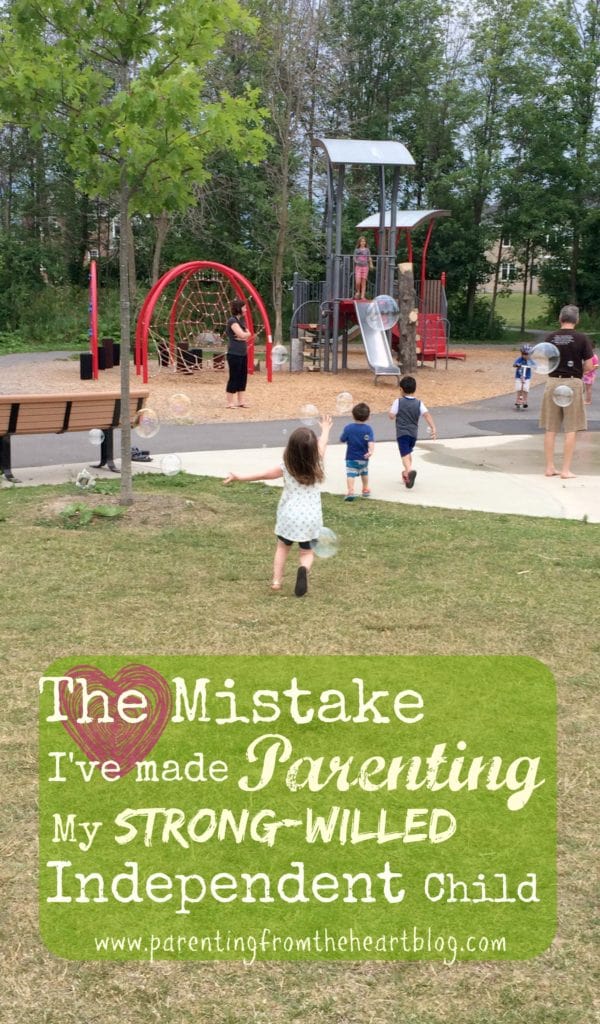 Because of being a strong-willed, independent child myself, and because of how my daughter is, I tend to give her a lot of space to be autonomous. I give her lots of choices when the results aren’t consequential.

She has a lot of free-play time.

At the park, I sit far back and watch her, occasionally engaging my son.

If I want to cuddle, I go to the little guy who wants to be near me. Even though I’ve tried to parent my daughter to the best of my understanding of her, I have made a mistake.

Yes, she wants her independence in a fierce way.

And yes, there are innumerable benefits to free, unstructured play.

And absolutely, I’ve given my daughter what she has expressed she wants.

Though she is generally happy, there are times she acts out. And when those times come they tend to intensify slowly, becoming more intense with time.

Through this, I have began to come to a realization. In giving her such space, while still keeping her brother close, I’m denying her something she actually needs – my attention. Of course, I read to her at night and craft with her in the day. We frequently talk about favourites of hers and I tell her countless stories when we are driving or waiting in line somewhere. I hold her when she is hurt and get down to her level when she’s made a bad choice.

But I don’t spend as much time with her as I do my son.

I don’t hold her enough just because I want to hold her. I don’t chase her as she attempts to outrun the wind, or choose to follow closely behind her as she forges her own path through the forest with friends.

I haven’t done these things because I have taken her word at face value. I have failed to analyze and infer what is best for her. I haven’t been close to her when she hasn’t asked for space because I’ve assumed she always wants space. I realize, however, that I have let her down in respecting her autonomy too much. And so, I am changing the default of my parenting. I’m snuggling into her when she’s on her own. I’m coming along side her to bask in her wonderment. I’m chasing her as she forges her on path. And in doing so, my daughter and I have a greater relationship.

[bctt tweet=”I’m changing the default of my #parenting after I realized the mistake I was making.”]