You are here: Home / Posts / 4 Penguin Crafts Perfect for a Penguin Party 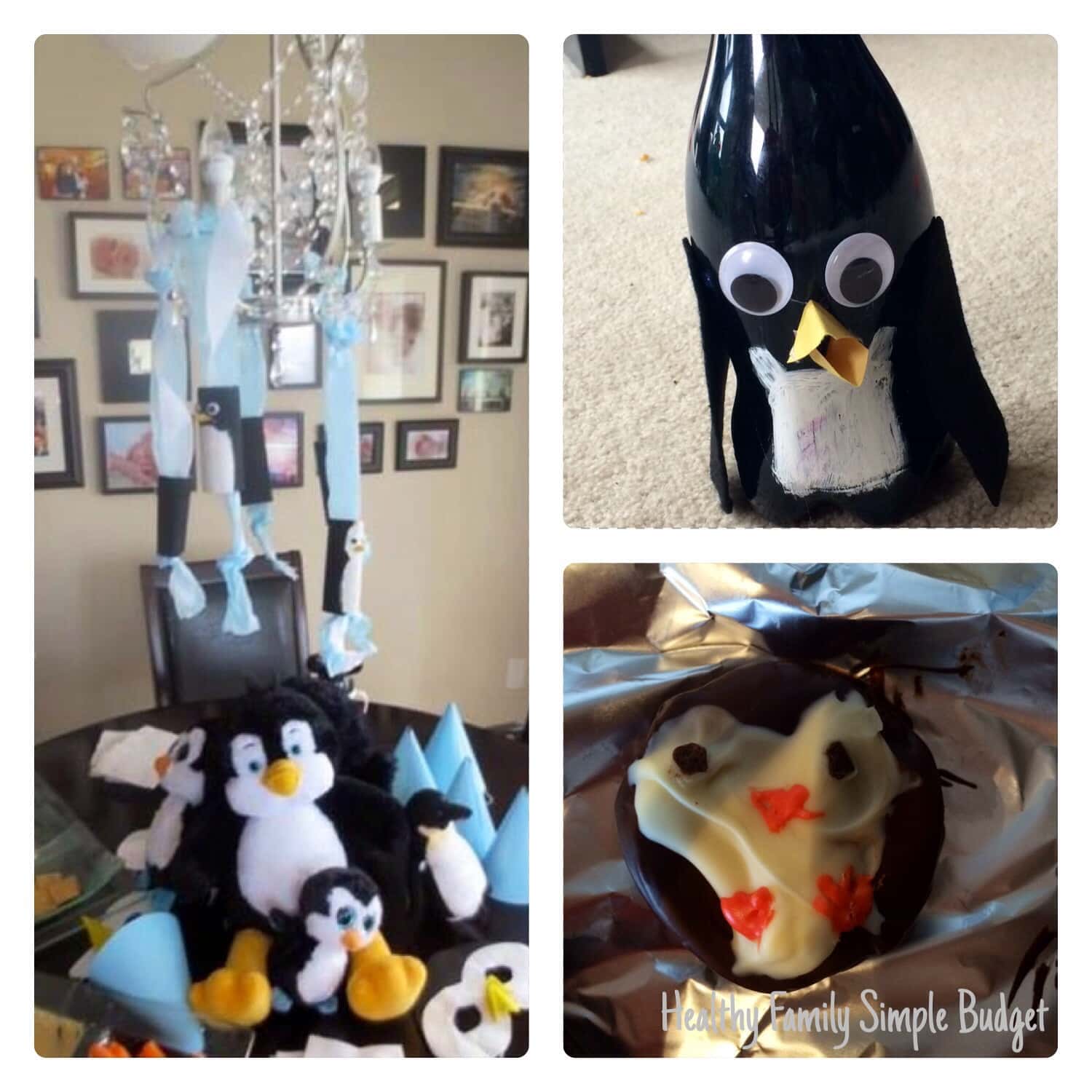 When it’s come to my kids’ birthday parties, I haven’t had much luck buying already made decor items. Because my daughter was so fond of penguins around her second birthday, I decided to DIY as much as I could. After going through probably half a dozen stores looking for anything penguin (even stickers), I chose white (snow) and baby blue (arctic water) as the colours for my theme, and purchased paper plates, cups, streamers, and balloons that were these colours.

After peeling the labels off of the empty, plastic bottles, I put about a tbs of black acrylic paint inside each bottle and resealed them with their lids on tight. I let the kids shake the bottles until they were completely black. It took a couple of tries to get them perfectly coated. 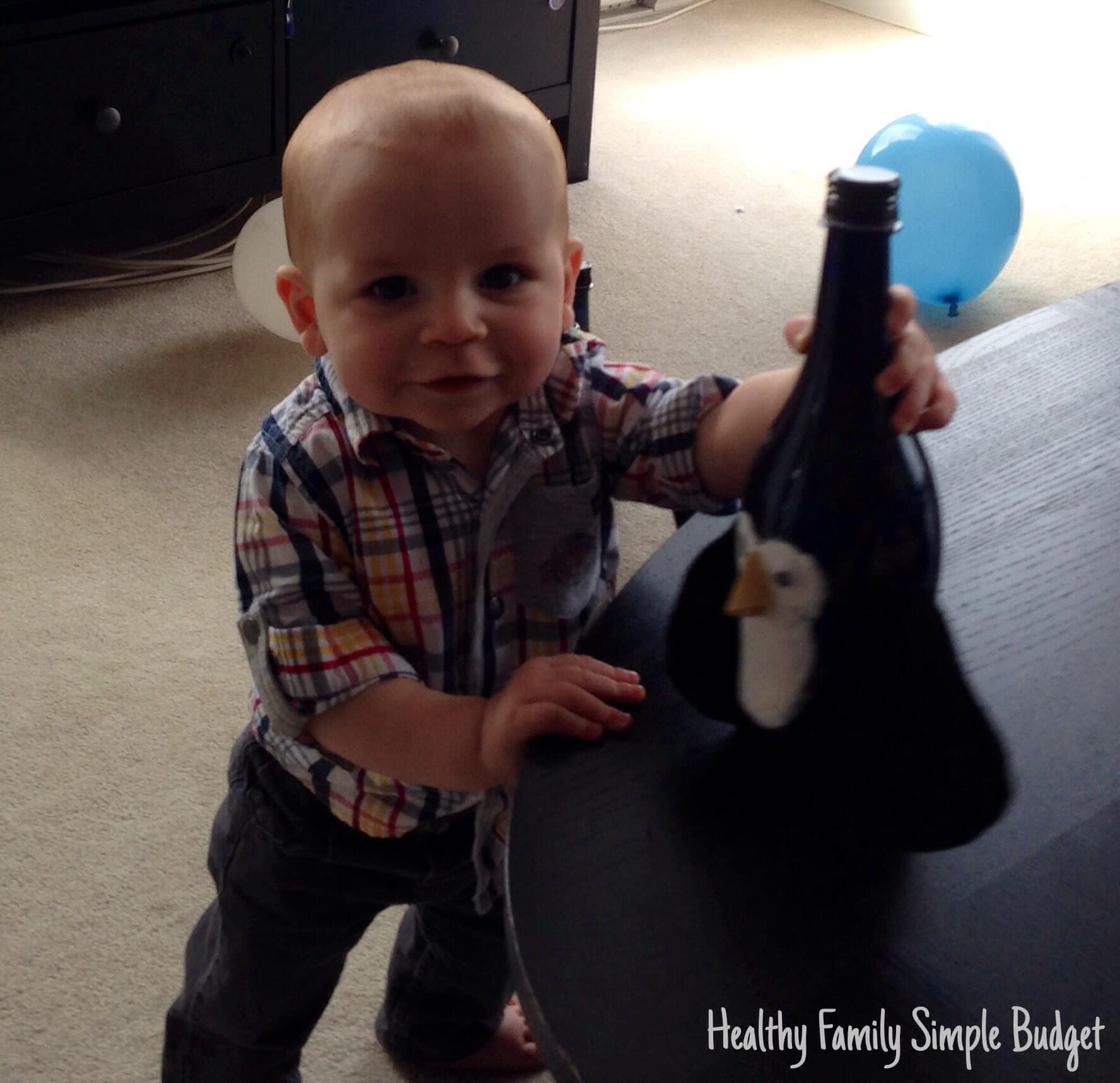 We then poured dried beans until each bottle was about 1/3 full. I then painted white markings similar to a penguin on each bottle and set them aside to dry. I cut one slightly larger triangle and one slightly smaller triangle for each penguin. I traced out wings in black felt, and once the white paint was dried, glue gunned beaks, eyes, and wings to each penguin. You can also add feet with the yellow construction paper. However, we didn’t. Once everything was dry and set, we were able to bowl! 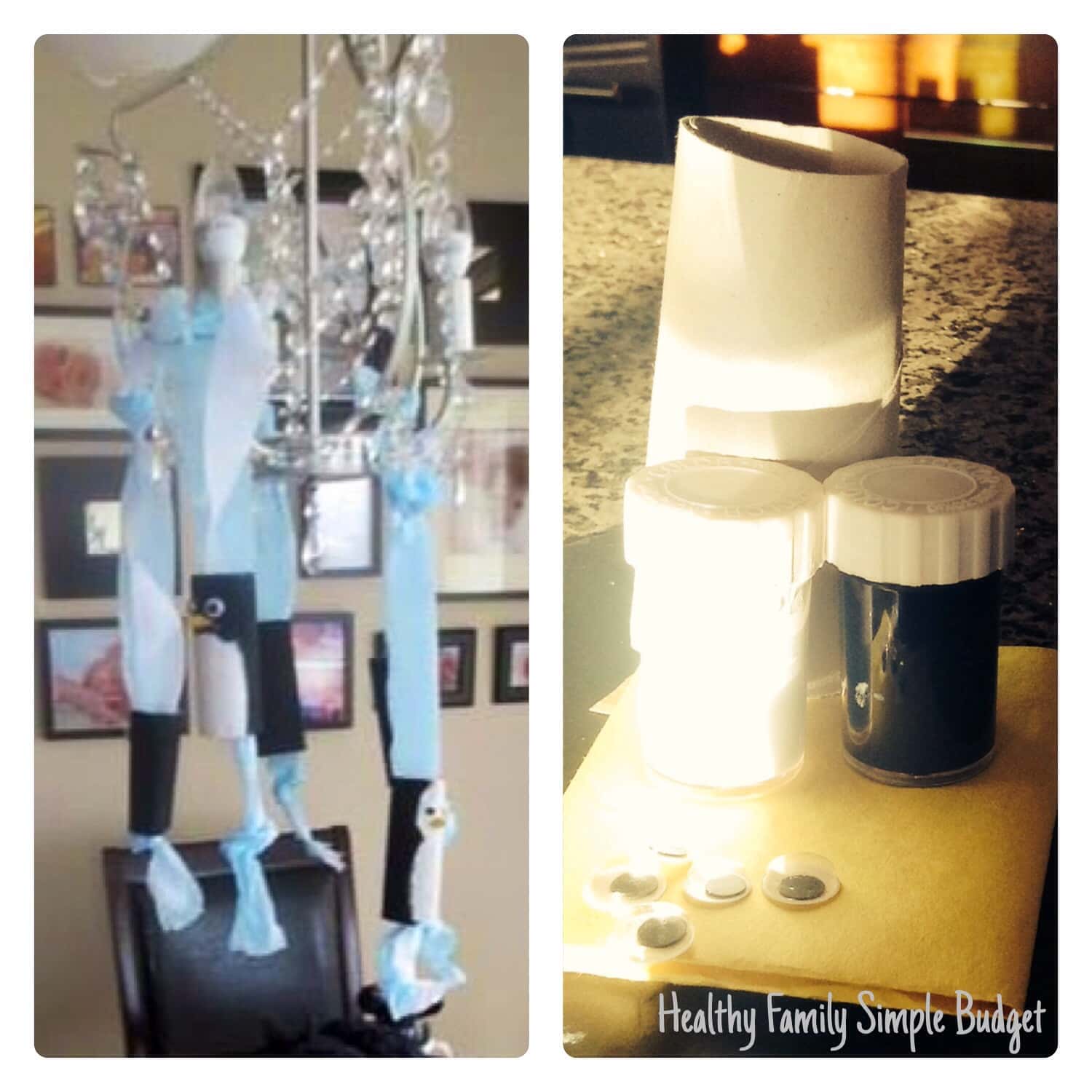 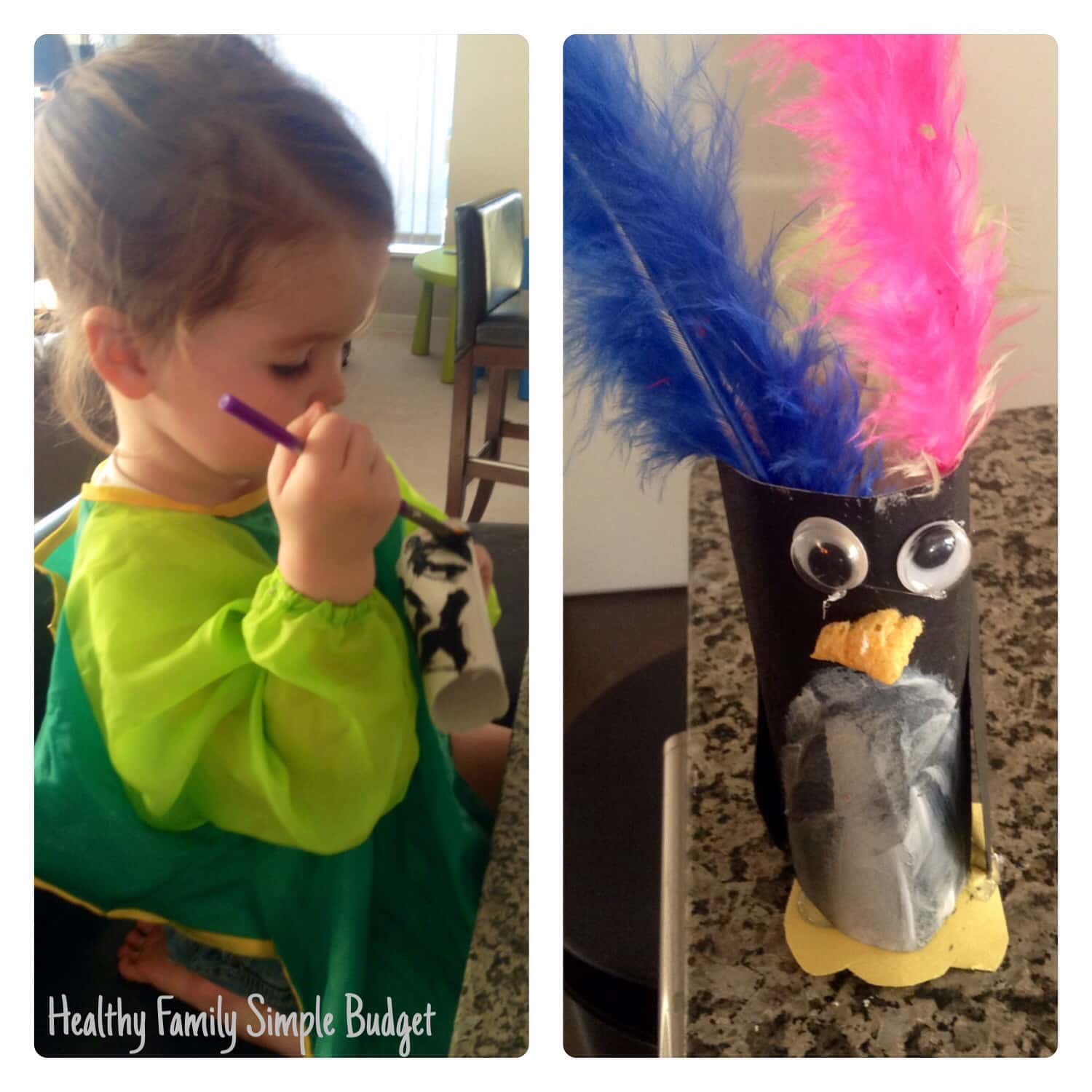 My daughter and I took to painting all of the toilet paper rolls back, and then I painted white markings once the black paint had dried. I cut old Captain Crunch cereal (no one eats it in our house, but we had some) diagonally. Once the white paint had dried, I glued the eyes and beak to the penguins. In the example above, I didn’t make wings or feet, though I have when I have done this craft before. If you’d like to make a macaroni penguin, then use feathers on the

inside of the toilet paper “head.” 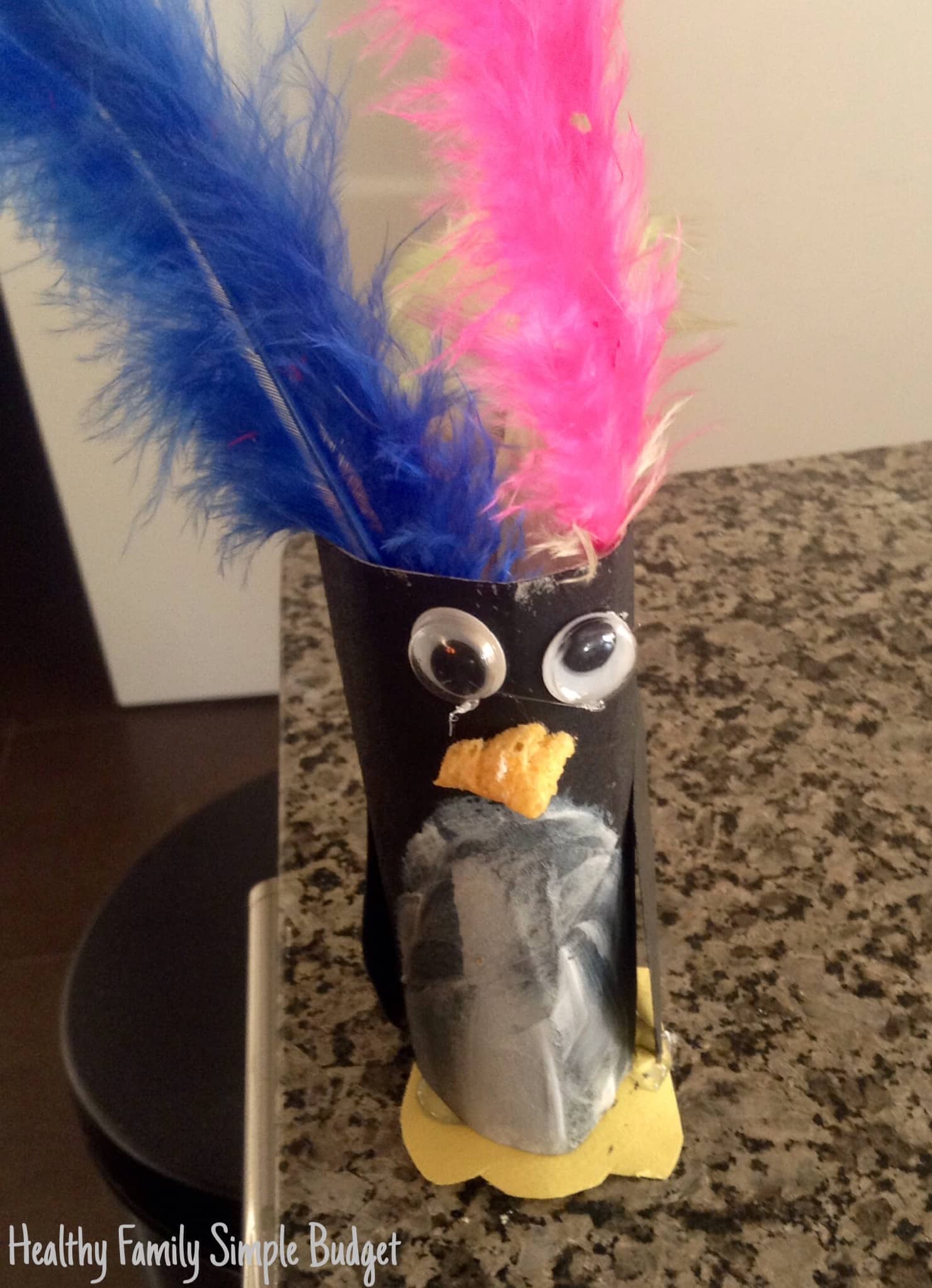 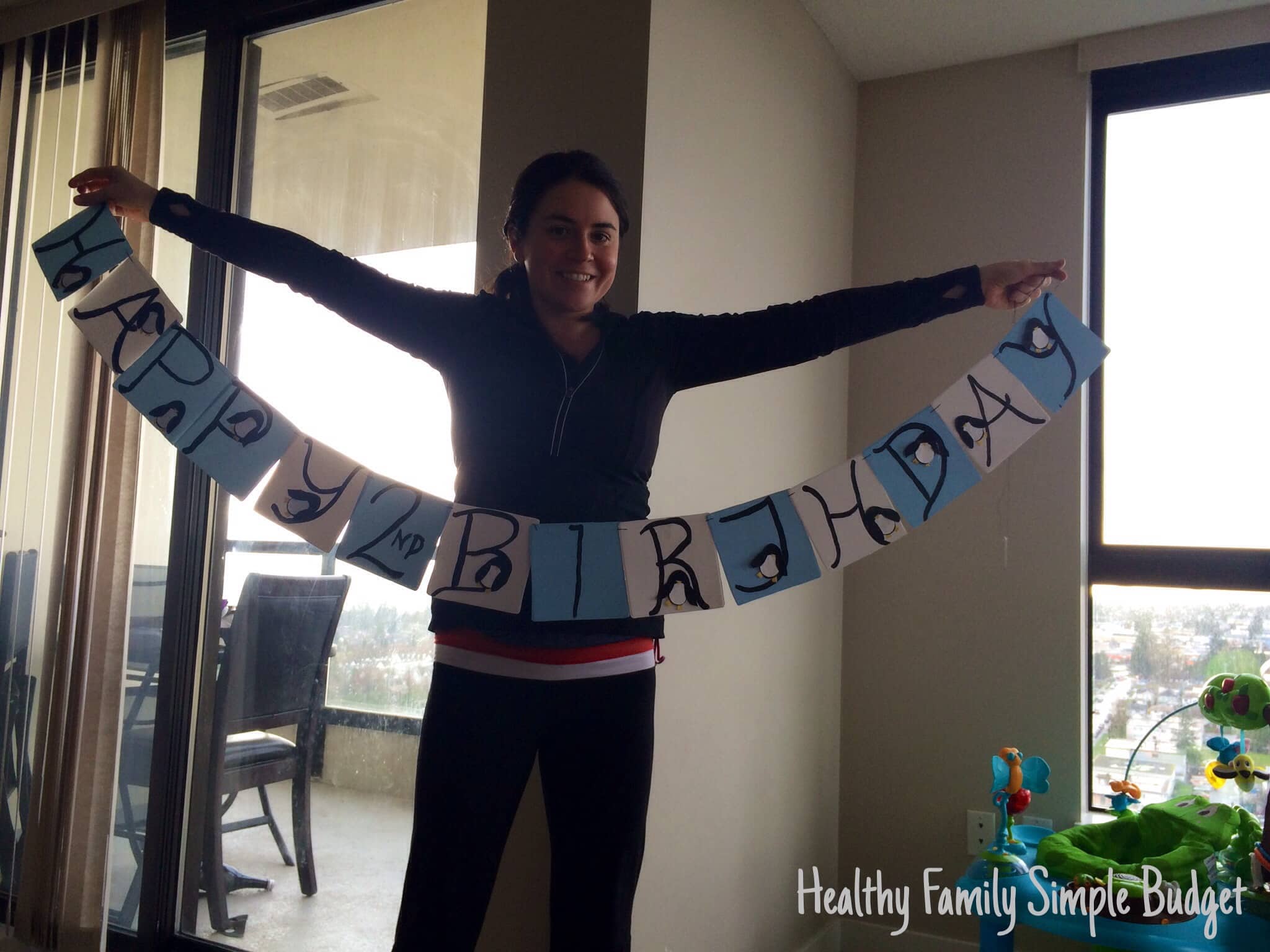 Now this craft was the most time-consuming of all and ended up being one I did solo.

After cutting the lips off of each plate (I did 14 in total, enough for each letter and “2nd” to make “Happy 2nd Birthday”), I traced out 14 black ovals and 14 circles using shapes from my kids’ toys. I then drew out a prototype for a wing, traced out 28 of those, and cut all tracings. I took the yellow construction paper and cut out 28 little feet, and 14 little triangles to look like beaks. I then used the glue stick to glue each of these together. I glued the white circle to the black oval, the backs of the feet behind the penguin, the wings to the front and the beaks right where the top of the white circle meets the black oval. I then painted a letter or number on each of the plates making “Happy 2nd Birthday”. Once the paint had dried, I glued penguins to each plate. Then, I threaded the needle with thick, black thread, and punctured a hole coming from behind at the top right corner of the first plate. I attached each letter this way, and then hung up my completed sign!

After melting the dark chocolate in the microwave, we covered each Oreo and set it on a foil covered pan. Once the chocolate had set (either the freezer or fridge can expedite this process if you’re impatient like me :)). Melt the white chocolate and spoon it into bag. Squeeze out the white chocolate on to the cookies the shape of a heart. Place the cut chocolate chips in the place of eyes. Allow chocolate to set. Then mix cookie icing with food colouring in a small bowl. Take a toothpick and draw on beak and feet. 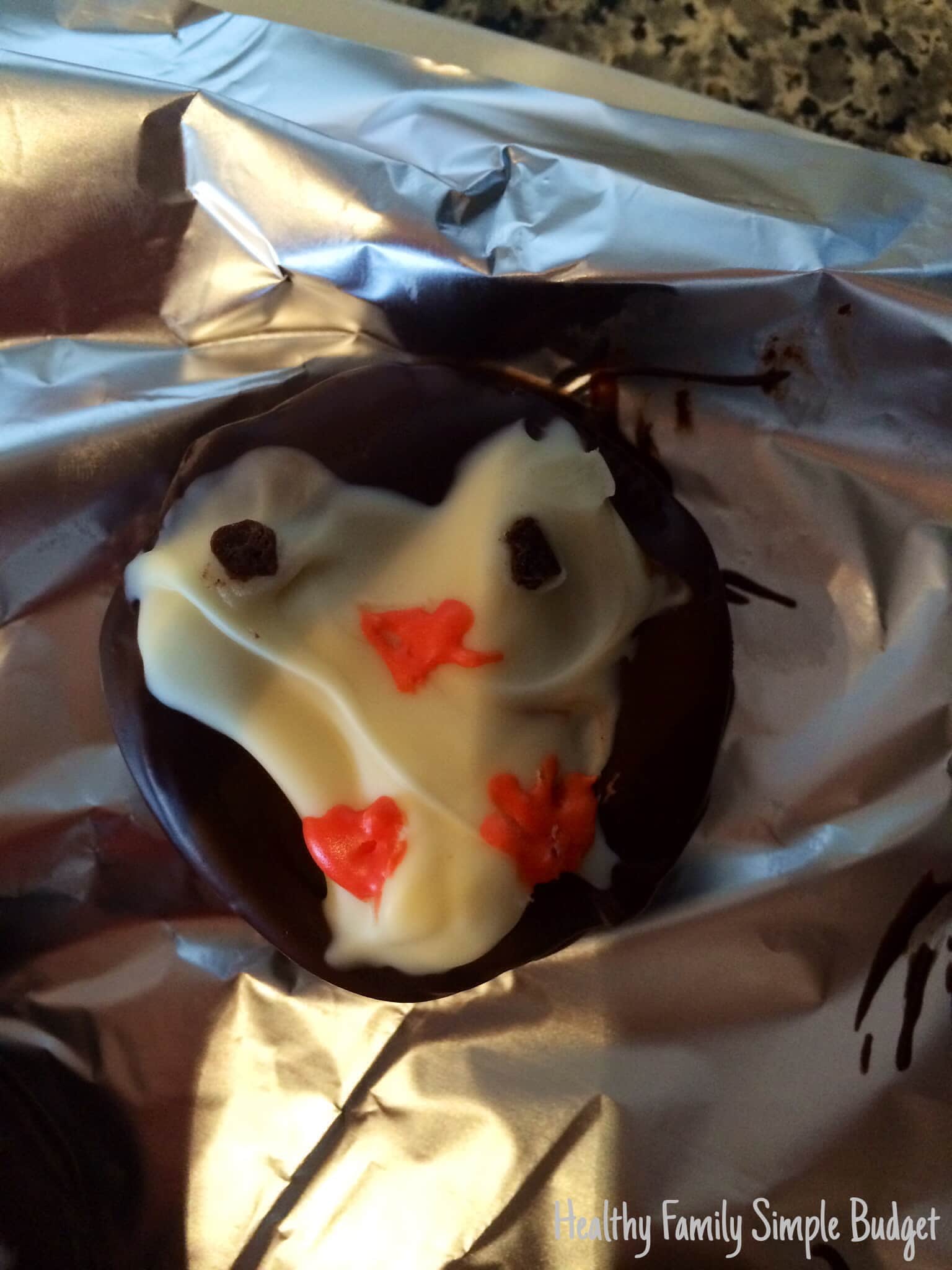