You are here: Home / Parenting Tweens and Beyond / How to stop backtalk and restore peace in your family 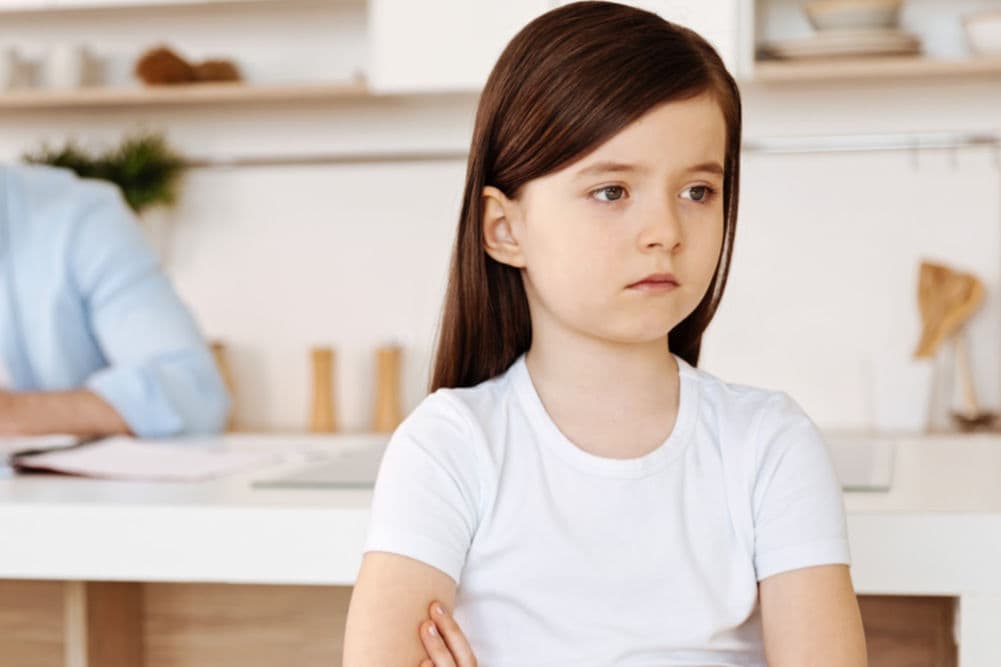 For a parent, one of the most humbling and frustrating experiences is when your child backtalks or disrespects you. This powerful approach is rooted in positive discipline and will calm the most disrespectful behaviour and stop backtalk.

Get a printable cheat sheet with this technique at the bottom of the post.

There have been times in our family, I have felt like I am walking through an emotional minefield.

For example, one day the simple act of as asking my daughter if she wanted to go to the park evoked some major backtalk.

“Hey, you want to pack a picnic and head out to that big park by the creek?”

Usually, my daughter jumped at the chance to pack food for our family.

“Well, if you don’t want to go there, how about you pick the park? I’m sure the boys would like anywhere you choose.”

Her backtalk pierced through me. Though I did my best to appear calm, my heart raced.

How entitled was this child that she:

Because tempers were running high, I took a step back.

In the past, I berated my children with lectures. In this instance, it would have looked something like:

“You know you shouldn’t speak to me like that. Why aren’t you excited to do something with the family? You love that park and you love packing picnics. What has come over you that you think you can backtalk like that?”

None of these sorts of questions were genuine. They were all rhetorical. And I barely would have paused for a breath.

But, I’ve slowly learned to do better.

It’s taken some practice, but now I wait to until the heat of the moment has passed before I discipline my children. Studies show that children in a reactive state, that is when they are angry, frightened, or excited, are not receptive to what a parent is saying (1).

I could tell my daughter was genuinely angry And because of this, I knew that a simple correction, such as, “You need to use a respectful tone of voice,” would not suffice.

(If she had been mildly irritated, I would have asked her to take a deep breath and start again. but I knew it was bigger than that.)

So… I tried to analyze what had gone wrong leading up to that point.

When I approached my daughter, she had Duplo, Shopkins and LOLs meticulously set out. I interrupted her while she was deep in play. Nevertheless, I still didn’t understand why she was easily triggered.

Because this wasn’t an isolated incident, I took some time to brainstorm how I could better equip myself to stop backtalk in our family.

Related reading: How to Discipline a Child: Why scientists say this is the best approach 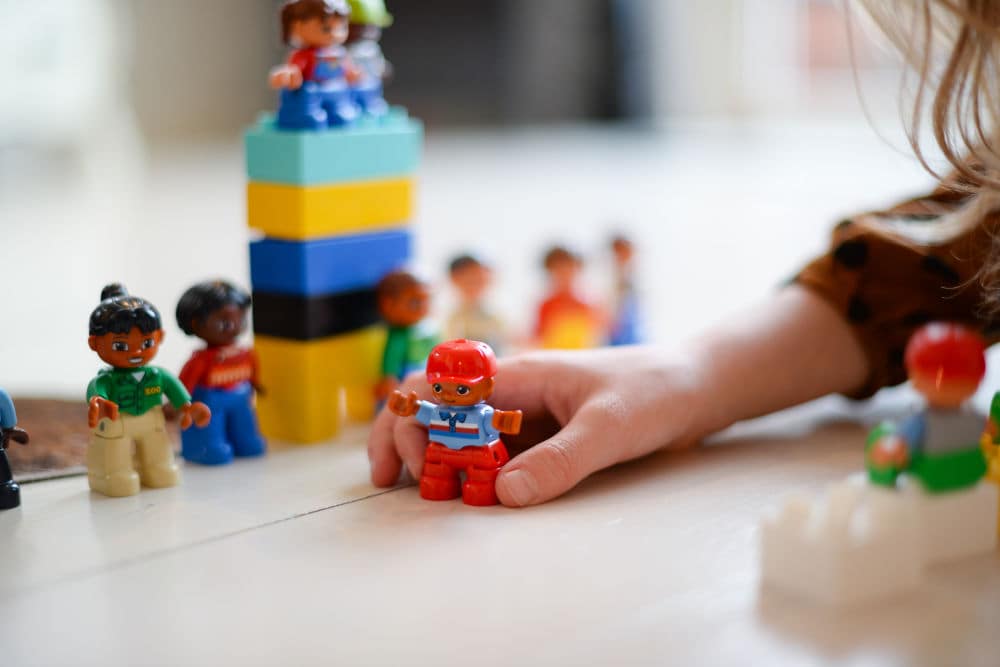 My daughter had Duplo and her LOLs set up and was angry when I interrupted her.

The first step to stopping backtalk is understanding why it is happening in the first place.

Adults and children are communicating something through their behaviour during every moment in every day, even if they are not aware of it. A child’s problematic or inappropriate behaviour is a sign that he is upset and that something is not right.

Armed with this knowledge, I put myself in my daughter’s shoes. I know that when I yell at my loved ones, often it had very little to do with what was going on in the given moment. There have been times, I have lost my cool because I’m worried about money, deadlines, and the wellbeing of my relationships.

So, I reframed my daughter’s backtalk.

It wasn’t an affront to my parenting. Instead, it was her white flag. Her backtalk was her not-so-constructive way of saying, “I don’t feel right.”

Now, just to be clear, understanding the behaviour isn’t approving of the behaviour. We would still need to address what went wrong. But first I needed to understand what was up.

I want to understand the source of her disrespect for two reasons.  Firstly, I want to help her release her pent up anger, worry, or sadness.  And secondly, I also want to stop backtalk from happening again. If I simply tell my daughter not to speak to me that way, I am haven’t gotten to the root of the behaviour. And, just like a dandelion, the problem is sure to sprout again without proper treatment.

The question remained: how should I get to the bottom of was bothering her?

Light bulb moment – I would try an “imago”

There is a powerful technique for couples’ therapy came to mind. Developed in the 1970s by Dr Harville Hendrix and Dr Helen LaKelly Hunt, imago therapy is an evidence-based model of counselling that facilitates healing and growth in relationships (2). Because imago dialogue is meant in the context of an adult relationship, I adapted it. Not only has it stopped backtalk almost entirely, but I have also used this adaptation in the context of sibling rivalry and other heated contexts.

How to use an adapted imago dialogue to stop backtalk

To start, escort your child to a quiet, private place.

This will facilitate honest responses from your child, will help him calm down and eliminate distractions.

Then, start the conversation.

In a traditional imago dialogue, a person asks if it is a good time to talk about an issue. In the case of parenting, it’s better to direct the start of the conversation.

For example, “You seemed angry when I suggested the picnic at the park. What’s going on?”

It may take some children some time to calm down, trust that they can speak their minds, or find the words to express what they feel.

For younger children, it can help to prompt them. It works well to say something like, “You seemed mad when you yelled at me, is that right?”

For older children, reassurance or simply waiting for their response may help.

Once a child starts talking, suspend all judgment, defensiveness and emotion.

As the child starts talking, the parent’s only job is to allow the child to get everything off her chest and feel heard. To successfully do so, the parent must suspend the desire to interject his experience on the child. If it helps, think of yourself as an investigator. Your job isn’t to take a side, emotionally react or try and get a point across. In fact, it’s your job to hear one side of the story as wholly and completely as possible. This means that if my child answered, “I got mad because my brother is awful!” I need to avoid the knee jerk reaction to say, “No he isn’t.” Instead, it’s my job to depersonalize her words and react calmly to diffuse the situation. Furthermore, I want to keep the dialogue going so that she has the full opportunity to release all of her pent up anger.

Here’s how to execute an imago dialogue to stop backtalk and disrespect. 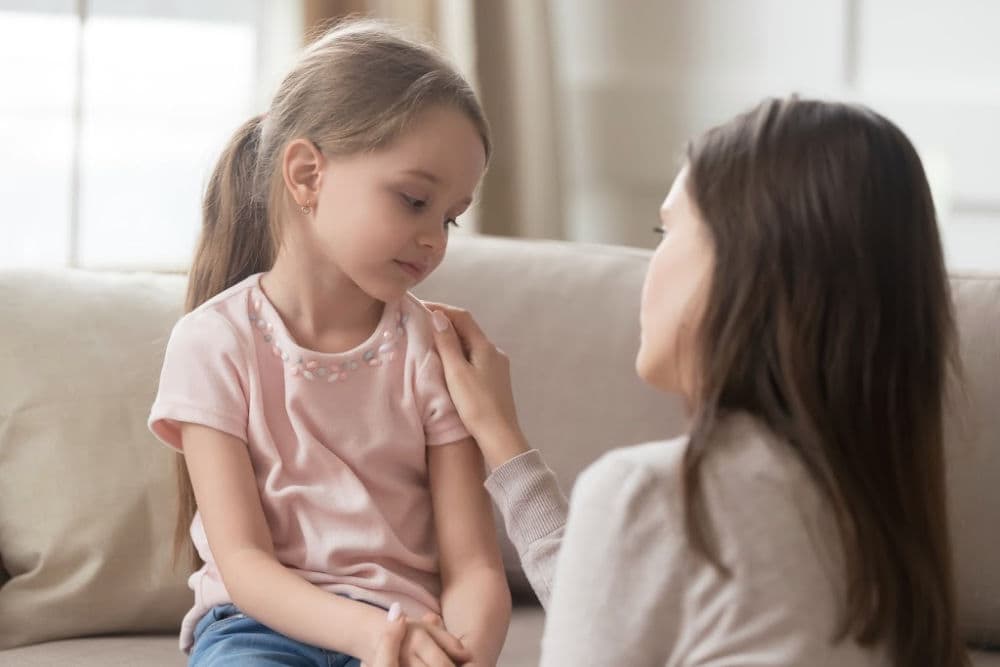 The imago dialogue was faster and more effective than I thought.

When I decided to use this technique to stop backtalk, I anticipated it may be a long, drawn-out process. Instead, it only took a few minutes but the result was transformative. Through the dialogue, I saw relief wipe the frustration off of my daughter’s face. She didn’t have to fight to prove her point. And, she didn’t have to worry about me coming down hard on her. To her surprise, she was able to tell me everything that had been bothering her that day and that week.

I found out two things through our imago dialogue. First, she felt like every single time she sat down to play, her brother was in her personal space. Not only that, but she would tell him to leave her alone and he wouldn’t listen. Then, because I was tied up, I would say something vapid like, “Get along,” or  “Work it out amongst yourselves.”

She felt like she couldn’t get breathing room and I wasn’t paying attention to her.

Then, I came to her and interrupted her during a moment her brother wasn’t trying to push her buttons. That’s when I suggested she stop doing something she had been trying desperately to do (play with Duplo and LOLs). On top of it, I suggested spending more time with the person who was bothering her the most (her brother).

Now was the time to discipline (aka problem-solve).

Once we got to the bottom of the problem, I could parent appropriately. Had I simply told my daughter not to talk to me in a rude tone of voice, I would have compounded the problem.

Instead, we came up with a plan for the next time.

“You’re allowed to be frustrated,” I said. “But, you can’t talk to me that way. It’s rude and it hurts my feelings. Next time your brother gets in your space, how about we use a code word so I know to come over right away and help you?”

She beamed. “I’ll say unicorn. That’s one of my favourite words.”

It was settled and we both felt better.

A final note on how to stop backtalk

Of all the parenting techniques I have used, this is definitely the most effectual. While it may be tempting to shut down backtalk and not find out why it’s happening, it doesn’t solve the problem. In fact, it pushes the problem down almost guaranteeing that it will eventually overflow at a later time. By asking questions, paraphrasing, and empathizing, my children are taken out of a state of stress and into a state of relief. They then become receptive to my discipline. Also, this form of communication stops emotions from stewing under the surface and getting worse. In truth, imago dialogue is an effective technique for any tense or highly emotional situations as it gives peace of mind and clarity to the parent and child.

For additional reading, check out:

Parenting a Strong-Willed Child: Research says this is the key to doing it right

How to Discipline a Child: Why scientists say this is the best approach

The Yes Brain: How to Cultivate Curiosity, Courage and Resilience in Your Child

Previous Post: « The Lonely Mom: How to Conquer This Feeling and Engage a Village Again
Next Post: Parenting a strong-willed, sensitive child: This is what you need to know »