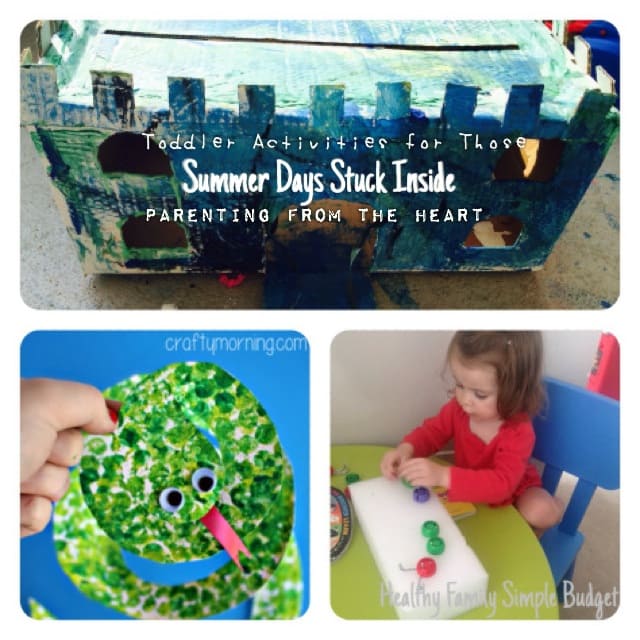 Hotter days have meant I’ve been less motivated to take on fun projects with my toddlers. Sure the kids and I go to a playground, spray park, or wading pool most afternoons, but I’ve found that lately I’ve just been going through the gears until night hits and the temperature cools a bit. Much to my pleasure, the past couple of days have been cooler and rainy. With our regular afternoon “go-to’s” rained out, I have fortunately found my energy to take on crafts like crazy. Aside from being fun having all sorts of crafts and activities in a concentrated amount of time, the other advantage is while we were waiting for one craft to dry, bake or set, we moved on to something else for the time being.

This post contains some affiliate links for your convenience.

The follow-up to Rainy Days, Runny Noses, here are some of the activities we had fun with on our Summer Days Stuck Inside.

My daughter painted the plate. We waited for it to dry. Starting from the outside, I helped her cut around the plate slowly making the snake’s body thicker as we worked inward; the first cut marked the “tail,” once we got to the centre of the plate, we cut out a shape for the head. Then, we used some glue and placed shapes on the snake’s body, and the eyes, and the tongue on its head. Ours got very well-loved since yesterday and did not get photographed in time for this post. Please check-out this link for a picture that looks very similar to what ours did before it died 😛 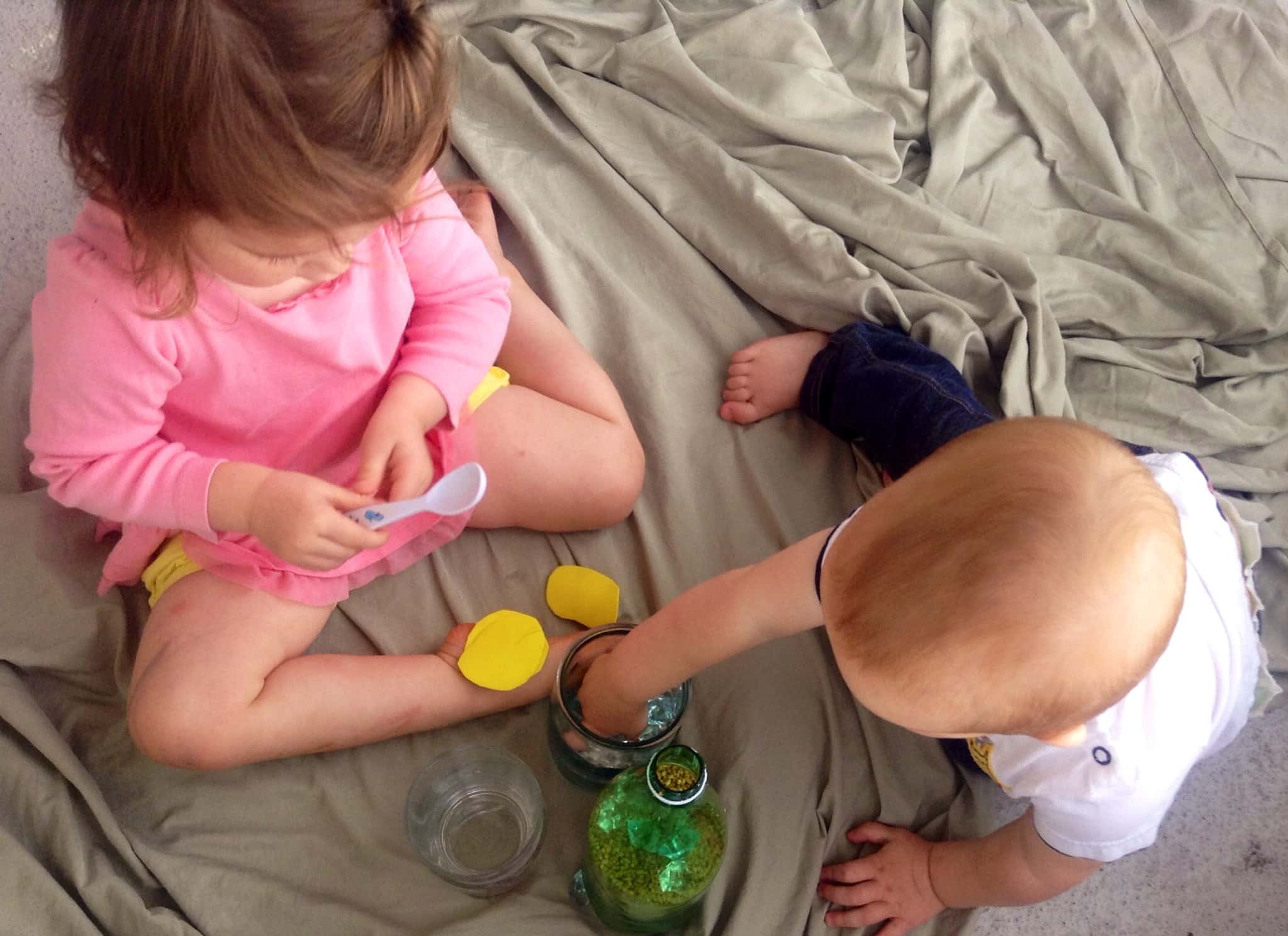 The day I posted my lemonade recipe, this fun “Lemonade” Pretend Play activity was shared on my facebook. So over yesterday and today, we tried it! 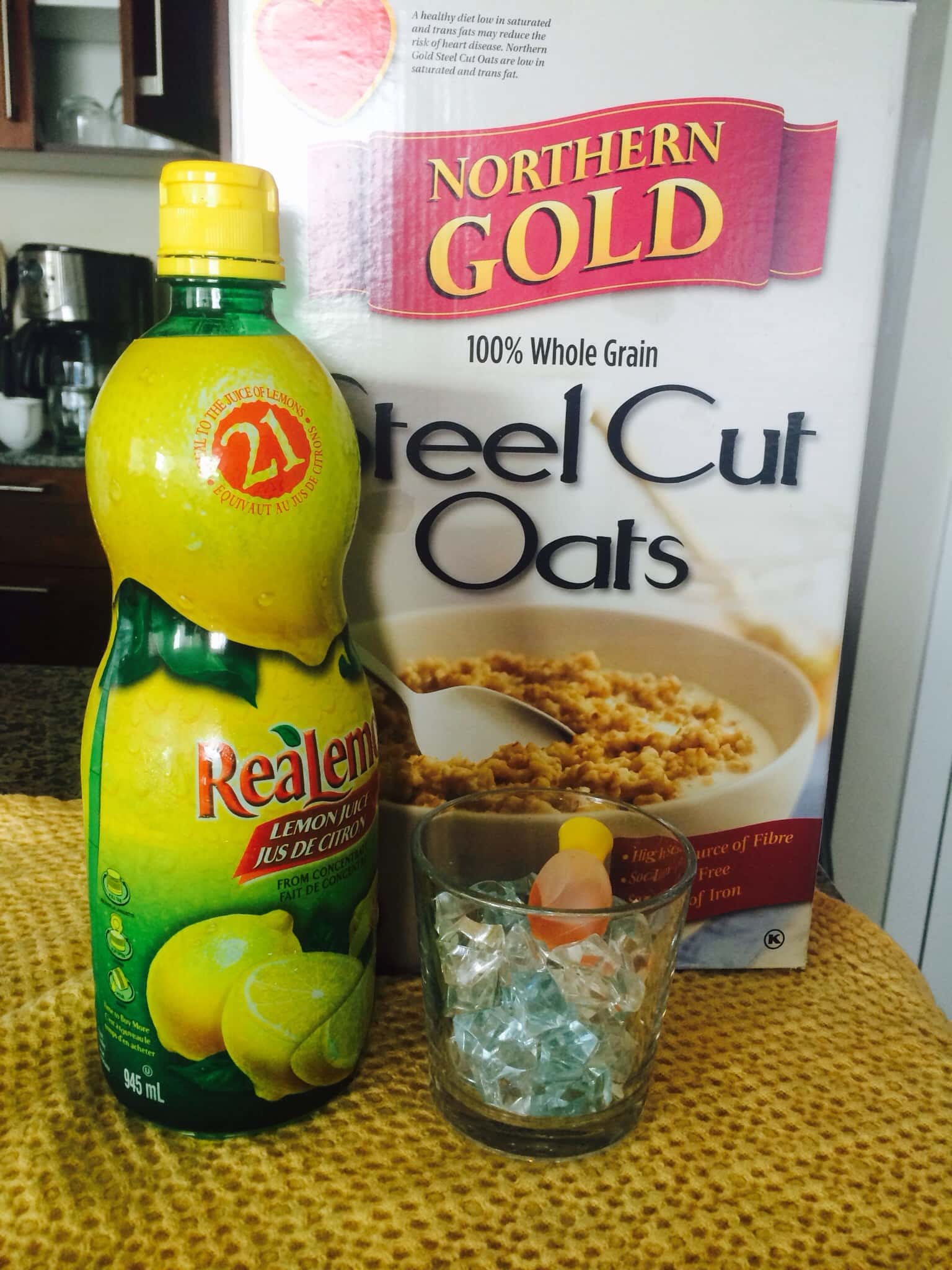 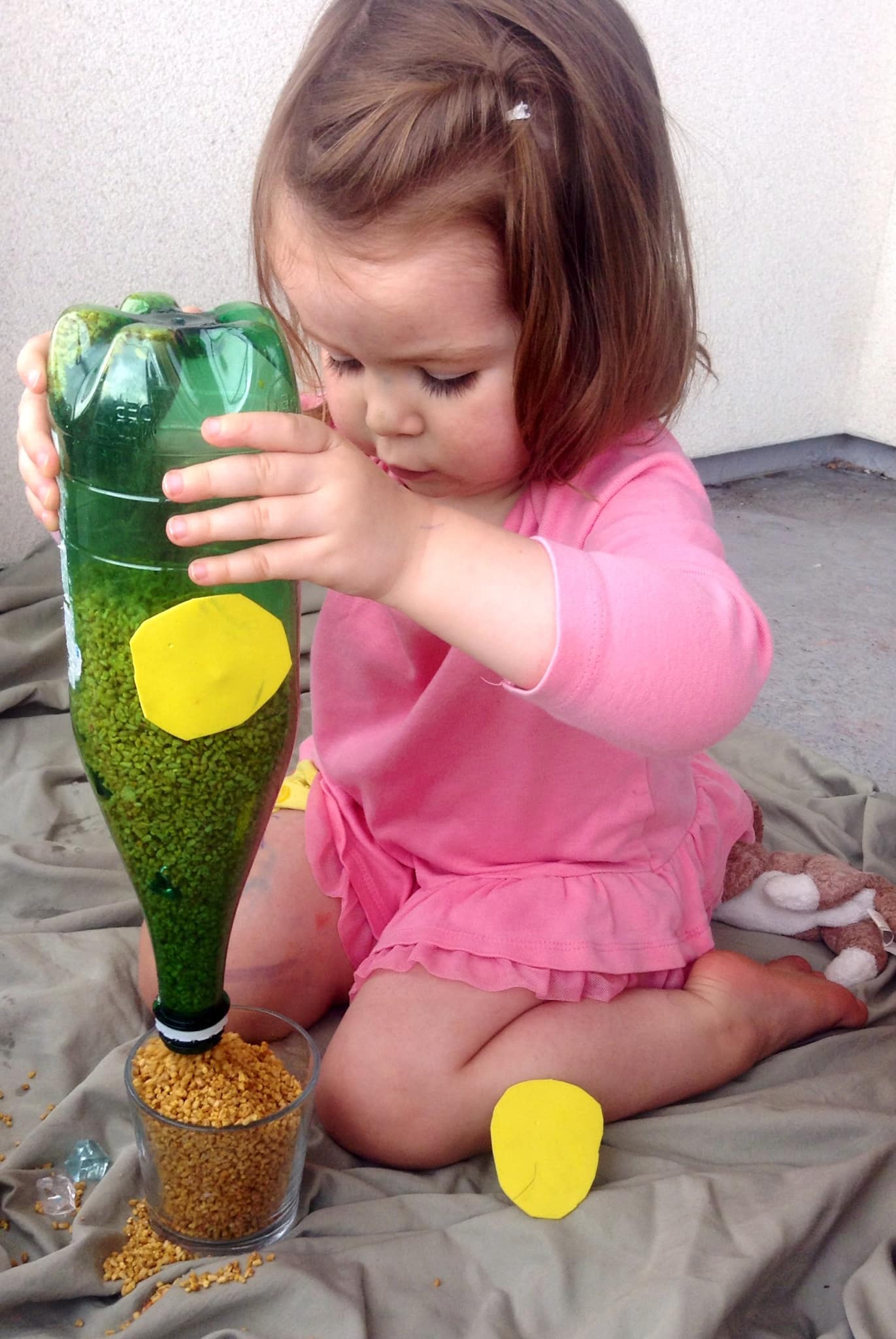 First, my daughter and I combined the top five ingredients into a ziplock bag. Then ,we had lots of fun shaking the sealed bag, passing it back and forth. I then let her draw circles on the yellow foam and we worked together to cut them into “faux” lemon. During her nap, I laid the contents out on a pan for it to air dry. Once the kids were awake, I set down a sheet (this helped contain the mess) on our patio. I poured lemon-scented oats in a bottle and mixed in a tsp of sparkles. I brought the bottle onto the patio with some glasses and the faux ice. We had a lot of fun!

The inspiration from this activity came while my kids were playing in a makeshift tent I’d set up. Using a sheet, and a couple of bar stools, and some strategically placed knots I set up our IKEA tunnel into the tent as an entrance, and thought about how cool it would be if I could make the kids some form of draw-bridge. Having seen this post on a DIY toy castle before, I thought I’d give it a go with an empty diaper box. 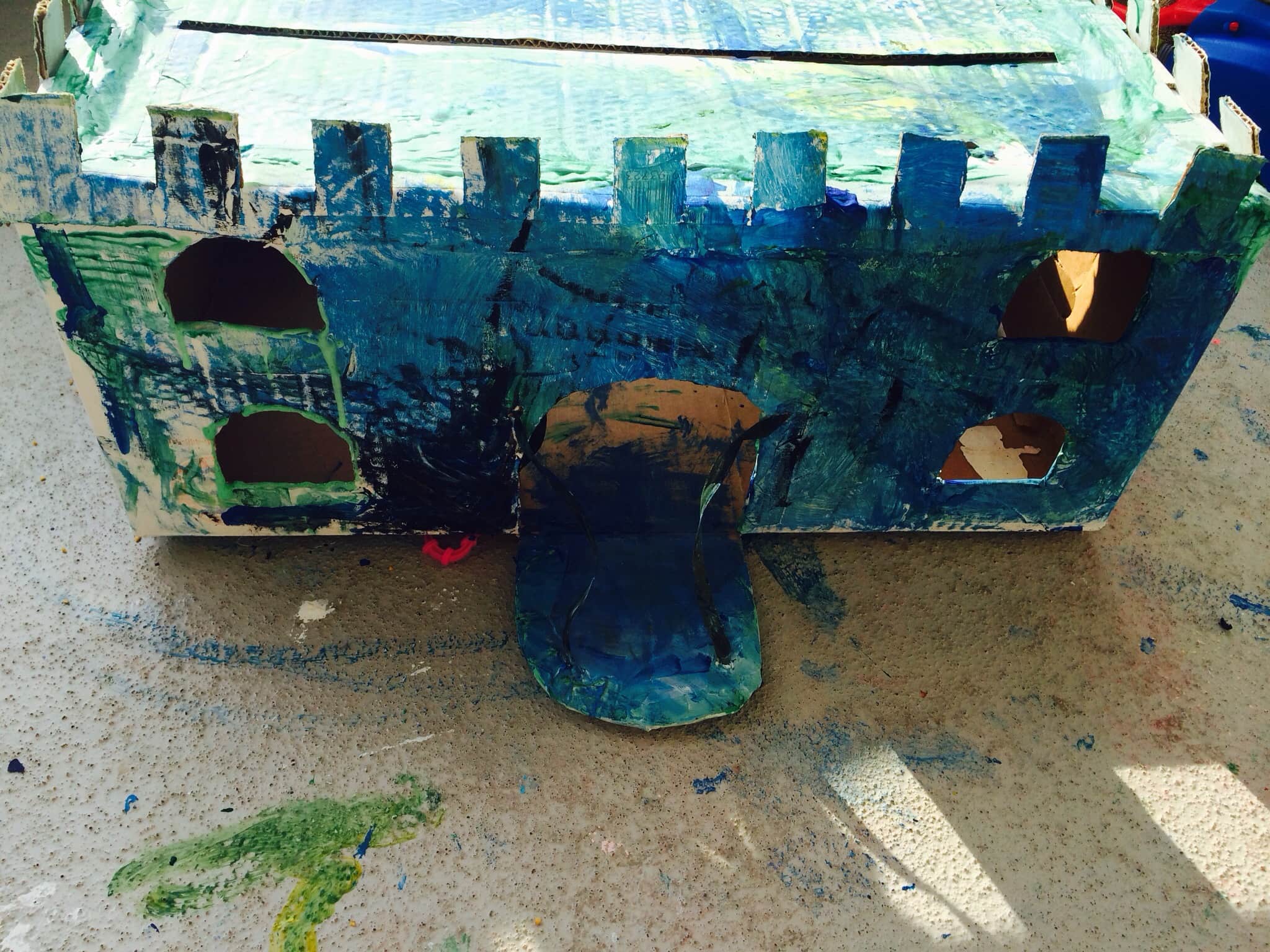 Using toys from around the house as stencils, I traced places for the draw bridge and windows, then cut them out. I also cut a large space in the back out so the kids could access the inside of the castle. I removed two of the flaps the four flaps that had previously closed the box: one from the width, one from the length of the box. Then, I determined the size I wanted the crenellations to be and traced a small block to denote both merlons and crenellations, leaving an extra 1/2 inch of cardboard as a base so the roof could be attached later. I didn’t cut each merlon out entirely, but left them attached to the base, and alternatingly folded down every second box. 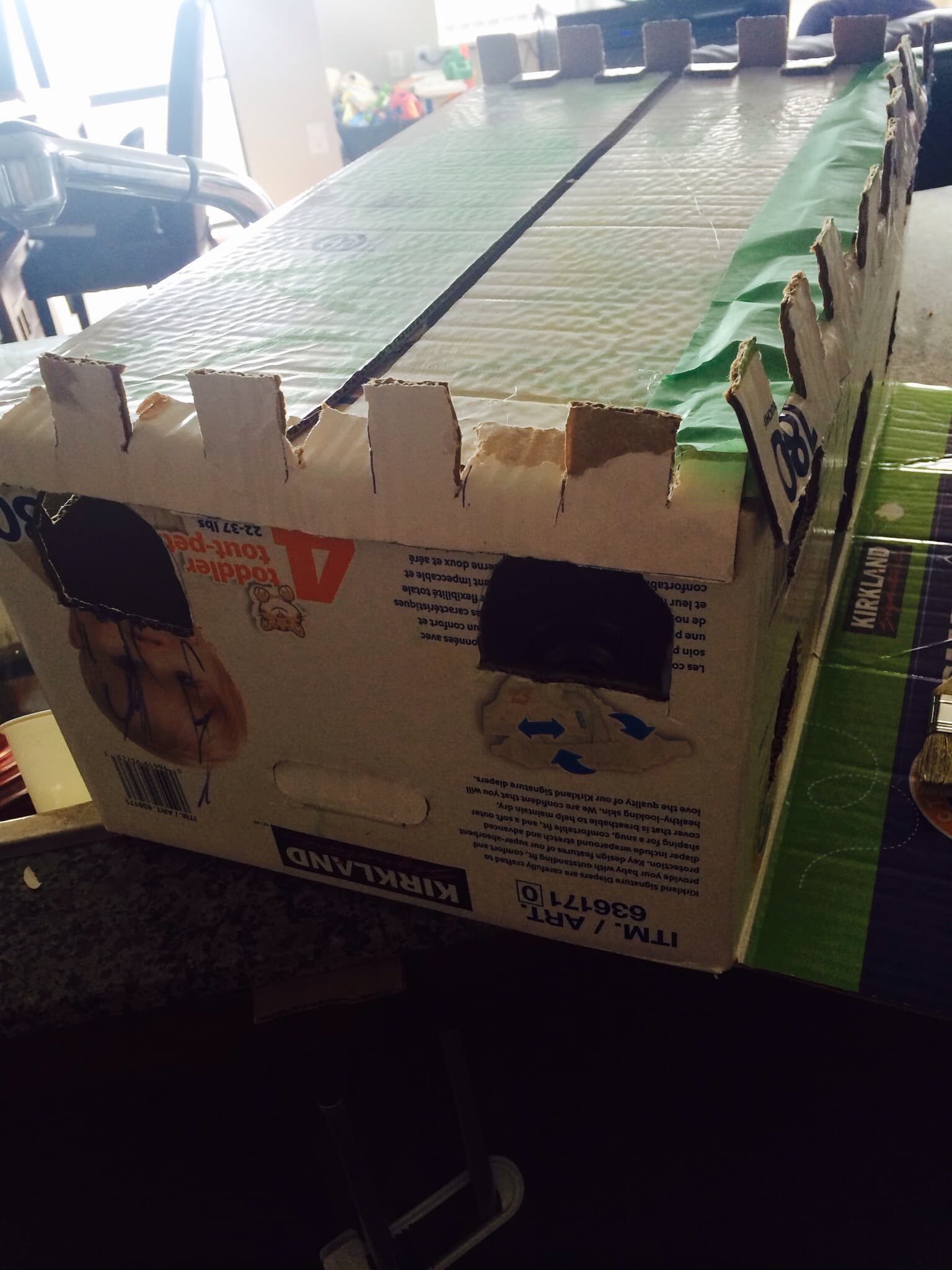 With the skewer, I poked holes on either side of the draw bridge and either side of the entry way, threaded the ribbon through, and tied knots on each end. With a glue gun, I fastened the castle roof around the perimeter of the box, putting glue on both the 1/2 inch base and every second box (the ones I had folded down). I also glued the two flaps that remained attached to the box together. This was to make the box more secure after having cut out such a large hole in the back for access inside the castle. Then, I painted the whole exterior with white gesso, so the kids paint would adhere to the gloss box. A bottle runs about $15, but the bottle I bought almost 10 years ago is as good as new and is only about 1/4 used.

Once that had dried, we had a blast painting away (I used paints that were almost done anyways so I didn’t have to worry about mixing colours). The best part, aside from the painting fun? We are going to bring this on vacation today along with some Little People and Playmobil toys we have. When it’s time to pack up and come home, we will recycle it thus saving some trunk space 🙂 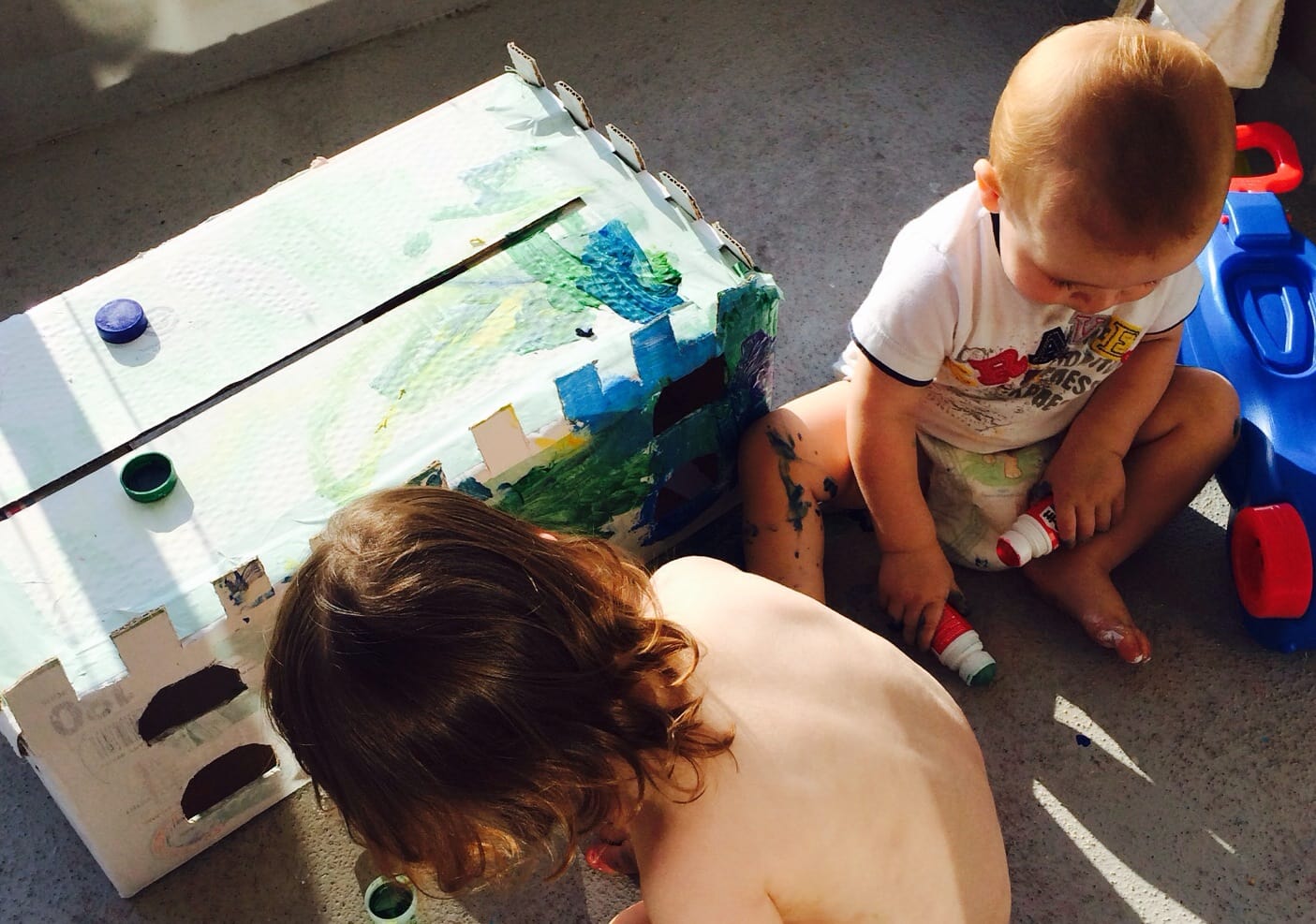 What are some of your favourite indoor activities for your family? Please share below.

Absolutely love this. via @the_therapist_parent