You are here: Home / Blogging / How I Have Increased My Blog Traffic By 240%

I am my own worst critic. And in being my own worst critic, I constantly think my blog stats are improving minimally at best. Recently, I went to update my media kit and decided to compare all of my numbers to three months prior. As it turns out, my blog traffic had increased by 240%! I had no clue. So I decided to head to Periscope and talk about what I’ve done differently. Because everyone was so receptive to what I shared, I thought I would make it into a post in case it may give others some insight, help, or new ideas.

In three months, my blog stats have increased as follows: 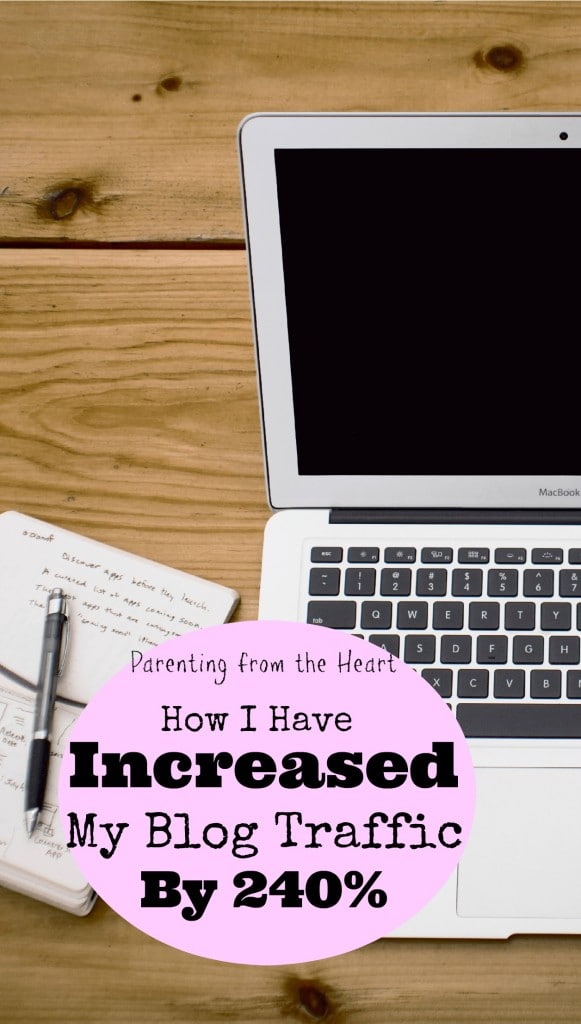 How I Have Increased My Blog Traffic By 240%

Paying it forward. Paying it back. And interacting with others content on their page. Read a good post? Share it, tweet it, and on twitter, tag the person. It only takes me a couple of extra seconds, but it means a lot to the author of the post or the owner of the content. They seem to typically pay it back. And, when the roles are reversed and someone shares my content, I try and pay them back as much as possible in the hopes of continuing a relationship of support. Also, the more people who share the same post, the greater everyone’s reach is on Facebook. Win, win.

Formatting my photos. All forms of social media are not created equally. At all. The ideal photo for Facebook is 470 pixels wide by 246 pixels tall. But that isn’t “Make or break” for Facebook success (as far as I’m concerned). Pinterest, however, is pertinent. Lately, I have been using a photo formatted for Facebook at the top of my posts and one for Pinterest in the body. Scroll through your Pinterest newsfeed and observe the format of the majority of the photos. Also, take a look at how vertical photos appear on your feed. By ensuring most of my posts (especially those that make the best pins) have a vertical photo with large text, I have generated substantially more traffic to my blog. The ideal size for Pinterest is said to be 735 pixels wide by 1102 pixels tall. However, I have had great success simply using vertical photos and have found a ratio of 9:16 for my photos (for instance, 1500 pixels wide × 4034 pixels tall) has looked really good on Pinterest’s feed.

Taking well-lit photos and editing them. The vast majority of my pictures I’m now taking outside or with lots of natural light and are staged with a nice, neutral backdrop. I have yet to actually make a backdrop for my photos but am planning on following these tips from An Uncomplicated Life Blog. Even with good lighting, I edit my photos lighting in an app called Tadaa. Then, using either PicMonkey or Phonto (an app on my phone), I add text for my pinnable image.

Participating in more pin for pin groups and being really picky about what I pin. Pinterest is about aesthetic, hence me editing my photos more. It also doesn’t serve me well to pin content that isn’t pretty and generally appealing. Fortunately, I’ve found some groups that allow you to choose what you pin or select something different from a given blogger if it doesn’t work for my brand. In participating in these groups and group threads, I have found my Pinterest interaction and, therefore my blog traffic have increased substantially.

Expanding my Facebook reach. By following these tips, my blog’s Facebook, which has just under 1,100 followers is reaching more than 6,000 people each week.

Using Periscope. If you look at my stats at the top of this post, my greatest growth has been on Periscope, then my blog’s visitors, then Pinterest followers. The largest factor in my traffic based on the Google Analytics of my blog has been as a result of Pinterest. Even though I haven’t had many direct clicks from Periscope through to my blog, I have no doubt Periscope has played a big role in my blog’s success as of late. The reasons are threefold (that I can infer at least). One, the sense of community I have with the bloggers in my network is far greater than it ever has been. People I already felt were unbelievable supports of my work have become even more involved in my blog as I have with theirs. Additionally, I have “met” so many other wonderful bloggers and non-bloggers who have shared, commented on, and given me invaluable feedback on what I’ve done or am working on. Two, it is a wonderful medium to share ideas that I have thought don’t have the gusto to make it into my blog. Many of these scopes end up in my blog as a result of viewers requesting to be able to refer back to what I’ve done in print. Three, a strong community has led to greater interaction and followers on my Twitter. I can’t pretend to be remotely good on Twitter, but I’ve seen the most interaction in my account’s existence since joining Periscope. This is because scopes post to my Twitter and Twitter handles and Periscope handles are typically the same (there are some very rare exceptions).

If you’re timid of scoping and want to get started, please check out Scoper Support on Facebook. If you’re interested in joining the Facebook group I help run that includes a quality pin for pin thread, please email me with your parenting blog’s URL.

What are some of your best blog tips? I would love to hear your insight!