You are here: Home / Positive Parenting Strategies / Parenting Toddlers / Parenting through difficult toddler behaviour: These 10+ strategies are simple and effective 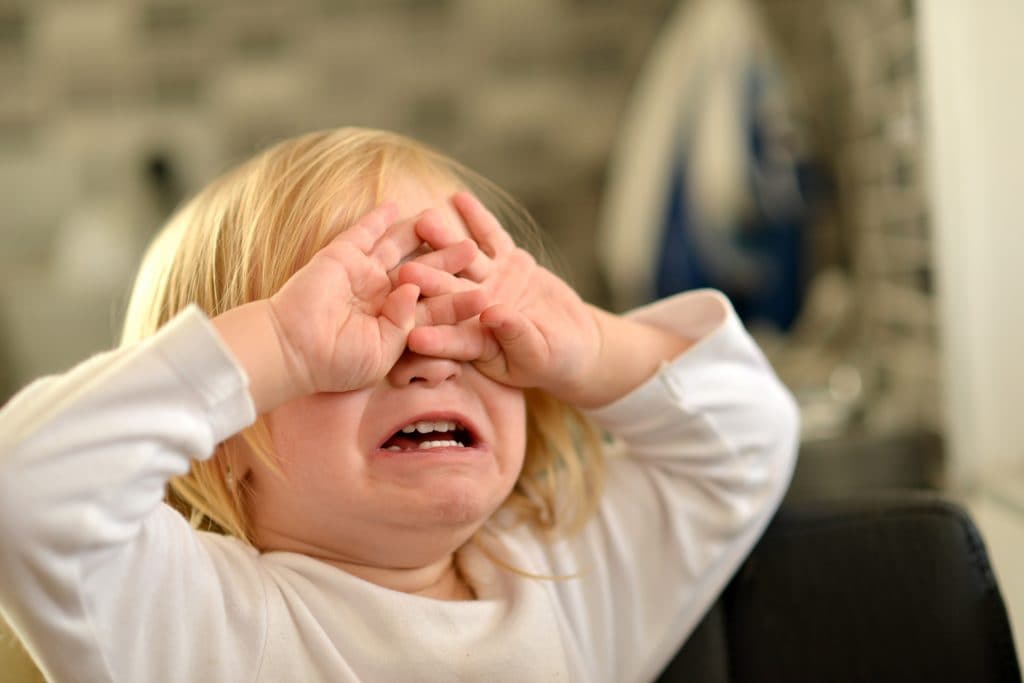 When you’re faced with difficult toddler behaviour, it can be painful. You simply want to move forward with your day, yet your child is digging in his heels or throwing a tantrum. Find positive parenting tips that will mitigate meltdowns and willfulness.

I had just got back from my first yoga class in a minor eternity.

Having worked on handstand more than any other pose, I left light, playful, and kiddish. The truth, is since we moved three months ago, I hadn’t left the house without my kids. That one-hour yoga class felt like the ultimate recharge.

Capitalizing on my kid-free time, I decided to pick up all of the ingredients for a treat I had seen on Pinterest.

I had barely made it through our front door, sweaty and smiling, when my I had barely gotten through the door when I was met with a meltdown.

“You missed Mama?”
I scooped up my son.

He settled only to realize his sister had found the mini M&M’s in one of the bags I had brought in. I set him down and offered him the chocolate chips from the same bag. Incensed at this pathetic attempt at compensation, he tried to swat them away. “Gentle touches, please. If you don’t want these why not ask if you can trade for the M&Ms?”

Now he was on the ground crying.

I brought him in my arms and hugged him. Crying persisted. Long story short, we ended up in his room for a calm down together and no candy apples were made. I could argue that he is in the process of getting his molars in. And, he just got a cold, but who am I kidding?! This kid turned two at the beginning of the summer and is definitely expressing his autonomy and upset in a shrill way.

Parenting toddlers through tantrums is no easy feat.

One of my favourite developmental theories touches on this period of toddlerhood. Erik Erikson’s stages of psychosocial development offer a wonderful framework from which to see toddler tantrums, resistance, crying, and other difficult toddler behaviours. In a nutshell, toddlers want to express their independence from you, show their preferences, and demonstrate their will for the first time.

So when my toddler arches his back when getting into his car seat or insists on only drinking out of the red cup, he isn’t trying to push my buttons or be disobedient. Instead, he’s started to taste independence and wants to continue working on this skill. The desire to express autonomy can override all reason (to the point of tears and tantrums) but is developmentally appropriate and important.

That said, it certainly isn’t easy.

These tried and true positive parenting tips help work through those difficult toddler moments. They are based on psychology research and my experience raising two toddlers.

Related reading: This is why you shouldn’t punish tantrums and what to do instead

Not only does this help set kids up for success because they know what is expected, but it also helps them make sense of potential discipline if their behaviour calls for it.

For instance, this past week, I took both kids to a children’s museum. Knowing my daughter loves to flit from station to station without warning and because I was there without another adult to track her, I told her beforehand that she had to say, “Changing Mama” before she went anywhere. When we got inside, I had to take her aside two separate times to remind her of the expectation. Due to our conversation before, she didn’t react to me stopping her play because she knew she had made a mistake. The rest of the afternoon she let me know before she changed stations.

1. Instead of saying no, offer alternatives.

To give an adult example, imagine being at a restaurant and asking something like, “Do you have a whole wheat option?” and they answer “No.” It creates a much better experience if the server says something along the lines of, “We don’t but if you are looking for something healthier, you can have your sandwich in a lettuce wrap or substituting the bread for a side of rice.” The message is the same: they don’t have the option I was looking for but I’m not being shut down.

For young children, a parent might respond to a request for Oreos by saying, “You need to eat your dinner first.” Or, “We’ve already had a dessert today, but you can have Oreos tomorrow.”

Equally, if a child wants to wear a swimsuit to preschool, the parent might say, “Bathing suits aren’t for school. Let’s grab some cool shorts and a tank top instead.”

The message is the same. They can’t have Oreos or wear the bathing suit to school, but the message is easier to digest than a straight no.

There are certain non-negotiables. For instance matters of safety like holding an adult’s hand while crossing the street, wearing a seatbelt, and sitting while eating are not up for debate. However other things like matching clothes, who clicks the seatbelt, and the occasional floor picnic at dinner time may have wiggle room.

3. Give two options with the same outcome.

This is one of the simplest tips for parenting through difficult toddler behaviour. Giving two options with the same outcome makes a toddler feel in control. Meanwhile, you get them to agree to do what you would like done. For example, “Do you want to put on your shoes or have mama put them on?” or “Would you like to clean up now or in two minutes?” Appealing to a toddler’s desire for autonomy can mitigate power struggles.

Related reading: Parenting a Strong-Willed Child? This is how to do it right

4. Give warnings and use a timer.

To use an adult example again, imagine if you were out for dinner at a friend’s house having a blast and suddenly your spouse interrupts mid-conversation and says, “We are leaving now.” He or she then ushers you away from your friend, and out the door.

The car ride home would likely be a poignant discussion if not an argument.

Likewise, kids do best when you preempt the end of fun with a warning. I find using a timer is the best indication of when to leave because it isn’t arbitrary. When I say, “One last slide,” my kids tend to put off that last slide for as long as imaginable.

Consequences that are a byproduct of their choices or are directly tied to them are shown to lead to better internalized moral reasoning. Natural consequences stem from the behaviour and aren’t imposed by the parent. For instance, when my daughter doesn’t want to wear her jacket, I suggest she stand on the porch for a few minutes. Each time she comes in and grabs her jacket.

Sometimes natural consequences are too risky and a parent must impose logical ones.

Related read: Consequences for kids: Why forcing kids to behave hurts more than it helps

Feeling heard and understood is one of the most valuable gifts we can give our kids especially when they’re struggling. So much of difficult toddler behaviour, or kids acting out in general, is simply them not having the words or the self-awareness to verbalize how they are feeling. In paraphrasing their feelings, they feel heard and can process their emotions more readily (read more from Child Psychologist, Dr. Laura Markham on this subject here). Paraphrasing also helps them develop the language to “use their words.”

When kids are screaming and crying, it may seem counterintuitive to hug them. Often they are just looking for a soft place to fall, unload, and feel safe. There are, of course, times when their tantrums are more physical and as a result, it’s better to give them space.

10. If it’s not negotiable, don’t enter into negotiations. Disengage.

When you’ve set them up for success and you’ve given them a lot of empathy, and they still aren’t listening, remember not to negotiate. Sometimes it is best to simply state, “I have said we can’t go to the park right now. I know you’re sad. I am not going to talk about this anymore.” Entering into a power struggle will only make matters worse. As a last resort, take a timeout.

11. Get present and, if you can, get outside

More often than not, I have found that the most difficult behaviour arises when I’m preoccupied or rushed. Sometimes dropping or postponing what’s on my to-do list, being present and getting some fresh air solves everything. Being outside has a way of regulating both parents and children alike.

When possible, waiting for the emotional storm to pass can be the best course of action. The crying will end and simply being there and loving a toddler through their big feelings is the quickest way through it.

Shortcuts generally don’t work. Saying, “calm down” only intensifies the reaction. Often the best course of action is to deep breathe and wait for cooperation.

In situations where time isn’t a luxury, parents can still help their toddlers work through their emotions. This may be something like scooping my son up, grabbing his shoes and saying, “I know you don’t want to wear your rain boots. It’s frustrating when you want to wear sandals. We have to go. It is upsetting. You can wear your sandals on the next sunny day.

Toddlerhood isn’t easy. It is the first time in their lives that they have a taste of independence and, as a result, can be quite willful when they don’t get their way. The good news is there are many positive strategies parents can put in place to mitigate tantrums and promote cooperation.

For additional reading for difficult toddler behaviour, check out:

Previous Post: « When Positive Parenting Seems to Fail This is What You Can Do
Next Post: 11 Stunning Fall Leaf Crafts You’ll Want to do with Your Kids »