You are here: Home / Positive Parenting Strategies / To The Strangers Who Criticize My Parenting

It doesn’t happen often. Thankfully, in fact, it is quite rare. Nonetheless, every now and then, I’ll be out with my toddlers bouncing, distracting, warning, counting to three, and trying to appear sane. My number one goal is getting from point A to point B with the least amount of failing, zig-zagging, and whining as possible when a stranger pops out nowhere to criticize my parenting.

My most recent encounter with a disapproving outsider was certainly more of a passive-aggressive demonstration of disapproval than anything else. Though, I’ve also experienced the anything else. We were in the children’s section of a bookstore. A frequent hot-spot for toddlers on rainy days, it is a place we love. I’m a huge fan of children’s books. Plus, the store has demo toys available for kids to try out. As usual, my kids were having a good time. My daughter was lining up a set of mini cars. My two-year-old son decided to put on a Star Wars mask. Now, I will be the first to admit his boyish nature can seem borderline deranged at times.

Despite his Godzilla-like behaviour, I encouraged his imaginative play.

It’s pretty awesome when he can get in character (albeit a growly and monstrous one) at such a young age. I had just finished telling him he looked cool when a mom, who had overheard me encouraging his play, looked at her school-aged daughter and asked, “Are you okay? I can’t believe she’s letting him act like that!”

My blood started to boil as the mom locked eyes with me and very clearly proceeded to ask her daughter again if my son’s growling was bugging her.

I bit my tongue and breathed deeply as the woman’s daughter told her mom to stop and that she was, in fact, fine. 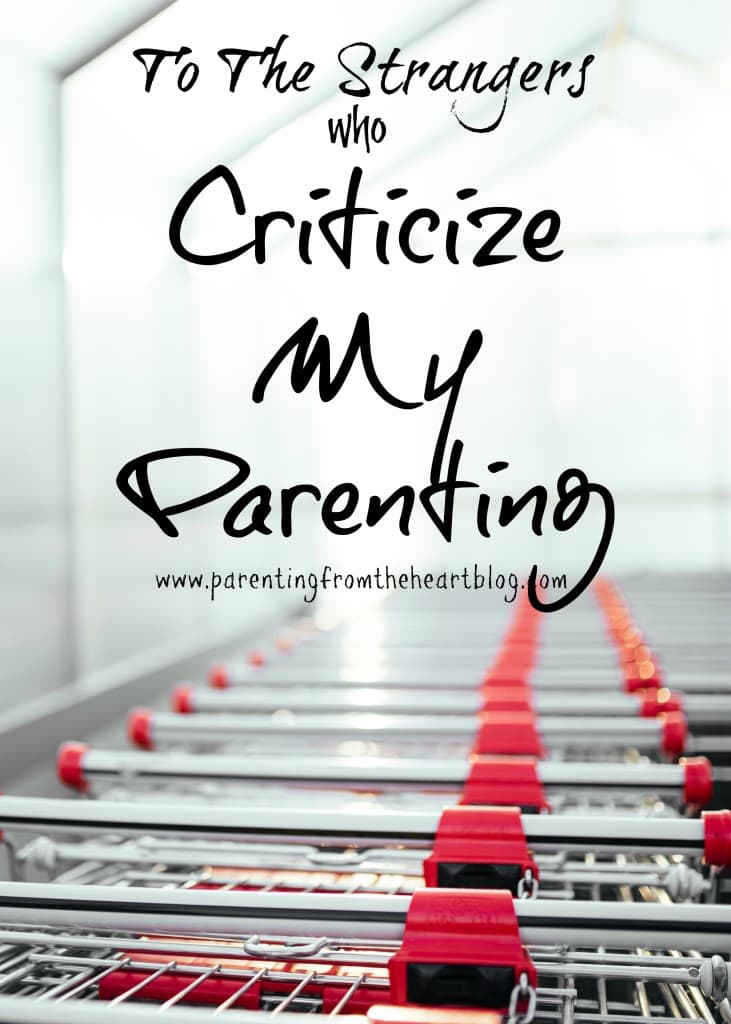 As my heart rate decelerated and the moment passed by, the experience got me to thinking of run-ins with other parenting haters in the past.

There are a handful or so that come to mind. Like, the time a friend of a friend asked if my four-month-old was sleeping through the night, laughed, and then proceeded to ask me what I was doing wrong. Or the time I was scolded in the grocery store because my nine-month-old had taken off her socks for the umpteenth time. And that particular time, I had decided not to put them back on.

Oh, and there was the time a store clerk very sternly lectured my daughter for using the turnstile to get into a chain store one too many times. He then told me I would have to pay the bill for its repair if she broke it. Ummm really? Or the time a woman yelled at me saying I was raising animal abusers because I let my kids chase seagulls away from their food. It’s real shame birds can’t just fly away from a kid isn’t it? But I digress…

Sure, each of these encounters present in different ways. Nevertheless, when my day is interrupted by the disapproval of a complete stranger, I feel upset, flustered, and wanting to defend myself.

I want to give context to whatever was taken into question. I want to tell say to these parenting critics that the only appropriate form of interaction with a parent, and complete stranger I might add, is support, empathy, encouragement, or, all of the above. But I have a seeking suspicion the people who criticise strangers feel like they‘re on the right side of humanity. They feel they’ve imparted wisdom or discipline, or a life lesson on me. So even if I did find the proper retort, I have a feeling that I wouldn’t really be heard anyway.

So instead, I’ve decided to challenge myself.

The next time I have someone criticize my parenting, I’m going to take inventory of the random acts of kindness I’ve experienced. I’ll try and count how many people who have offered me a dry grocery cart on a rainy day; the number of times  people have let me in front of them in the grocery store line-up when they see me trying to lasso my two kids in line without losing my spot; or, of all the people who have held the door open for my double-wide stroller. I’ll remember the woman in the candy store. While my son was tantruming, she put her hand on my shoulder and told me she had been there too. Or, I’ll reflect on the day my daughter got lost in the dollar store. The cashier who found her bought my kids treats with her own money to help turn their day around. I’ll take a moment and think of everyone who is kind enough to compliment me or my kids as I’m clawing my way through the day, in dire need of sleep.

[bctt tweet=”The next time my parenting is criticized by a stranger, this is what I will do.”]

When I do take inventory of these acts of kindness, it becomes apparent that the critics represent such a small fraction of the people out there. I can’t even begin to recall all of the warmth bestowed on me and my kids, but I can count the hate.

Even if the haters rattle me momentarily, it’s pretty clear they’re an anomaly.

So the next time a perfect stranger meets me with anger, I’ll take the opportunity to be thankful. will take the moment of brief upset and take a moment to be grateful for the majority.