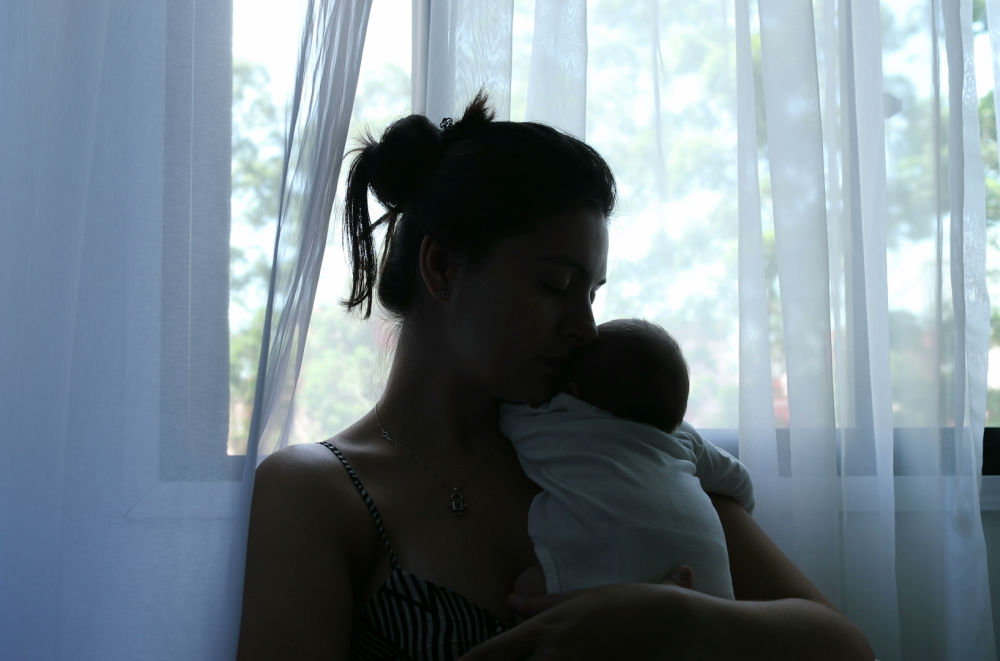 Her “Have a great day,” was like a slap in the face.

I was scrambling to find a way to continue our conversation and yet I knew her cheery salutation was the cue for me to leave.

Dejected, I packed my groceries into my double-wide stroller and left the store. As I let my oldest out of her seat and grabbed her chubby pink hand, I took a deep breath.

I needed a minute; I barely recognized myself.

Somewhere between my wedding day and back-to-back pregnancies my friends seemingly disappeared.

Maybe it was that it was too much to participate in all of the wedding events followed so closely by a baby shower.

Maybe it was because I hadn’t reached out enough.

Or maybe it was just that I’d found myself in a place where we could no longer relate to one another. Their lives remained relatively the same while mine was punctuated by nap schedules and tandem nursing.

I was barely holding it all together.

My apartment was in a perpetual state of disarray. The carpet was stained from baby puke mixing with industrial-strength cleaner. Piles of laundry occupied the couch and dining table. All the while, Fisher-Price people pilgrimaged across our home. To top it all off, my youngest was almost a year old and hadn’t yet slept through the night once.

And so the reality was my life had been reduced to trying to stay afloat while clambering for conversation from cashiers.

Read: The Lonely Mom: How to Conquer Feelings of Loneliness

It wasn’t until years later that I realized that it wasn’t supposed to be this way.

While gathering research for a paper on culture and infant development, it became clear that the support we offer mothers is wildly insufficient.

Western cultures, especially North American ones, expect families to be nuclear and mothers autonomous (1). Our culture expects two adults take care of their own family while having successful careers and focusing on self-improvement, but this isn’t realistic or reasonable.

It takes a village to raise a child isn’t just a warm sentiment but a requisite for raising children for a number of important reasons.

1. Infants are born prematurely when compared to other animals.

Because of their large neocortex, infants are born underdeveloped and highly dependent on their caregivers (1, 2, 3). In contrast, many mammals can walk shortly after birth (6). Also, non-human primates can cling to their mothers’ backs to stay in close proximity. However, our young must be carried or worn for their first year and even longer!

2. We raise our young past the age they are weaned.

Generally speaking, other mammals raise offspring until they are weaned. Then their young are either on their own or become part of the greater pack, pride, or pod. (Of course, there is the occasional bear who may have a yearling while still caring for her new cubs. But this is not the norm.) After weaning, human children need highly engaged care from toddlerhood on. It isn’t until adulthood that children have reached nutritional independence. And even then, in most countries, adult children live close to home.

3. Humans are the only species that raise multiple dependents, of different ages concurrently.

However, it’s common for humans to have several children at various ages and at relatively short birth intervals (1, 3). (I have a four-year-old, an eight-year-old, and a nine-year-old.) In comparison and as mentioned above, mammals wean their young and then send them on their way!

Read: These Research-Backed Strategies Will Make you Happier

Because of this, humans are meant to be communal breeders.

Non-parent caregivers ease the workload of mothers so that they can split their finite time between contributing to and caring for their families. This is seen cross-culturally. In the Congo, Efe people share in carrying infants by transferring their babies to different caregivers several times each hour (2). Women can’t forage, nurse their babies, and keep them soothed without help. Infants in this culture are in nearly constant physical contact with someone. Children in The Gambia are taken care of by older childer and other adults (4). And in western countries, children often attend daycare, school, and receive care from grandparents (6).

Sadly, in western countries “the village” is becoming less available unless it’s paid for.

Despite there being many developmental benefits to having kin-based childcare, it is becoming increasingly rare. Hardy (2009) states that modernization is negatively correlated with proximity to and care from extended family (1). In short, whether intentional or not, we tend to choose opportunities for self-advancement over accepting and offering support.

As such, the support from grandparents, extended family, and friends has largely been replaced by paid childcare. And though paid childcare most certainly plays a crucial role in our lives, not everyone can afford it and it isn’t enough.

Read: The worst advice for new moms made right!

The more I read about cultural norms in other societies, the more I realized we should be doing better.

As I continued on with my research, I learned just how natural it is in other societies to rally around new mothers and provide them ongoing help. For instance, Tronick, Morelli, and Winn found that Efe infants had an average of 14 non-maternal caregivers in their first 18 months of life (5). These infants were still largely attended to by their mothers when upset or hungry. However, the mothers in this population literally had their village to help them raise their babies.

This stood in stark contrast to my experience as a new mom desperate for a cashier to want to talk to me.

Looking back, I cannot make my own experience better but I can and will do better for other new moms.

Previous Post: « How to respond when your child hates school
Next Post: How to discipline a child: Why replacing harsh punishments with compassion will improve behaviour »