You are here: Home / Posts / Lessons From The Playground

Weather-permitting, we spend a lot of our day at the playground. Sibling rivalry seemingly dissipates as soon as my kids’ feet hit the grass. The park becomes a canvas for games of chase, escaping dragons teamed up with big bad wolves, the making of mud pies, the sale of flowers and more. While we have frequented the park since my oldest was able to sit in a swing, it’s only been recently that she has become particularly intent on making friends. My three-year-old girl will almost cascade down the hill towards the play structures where several kids typically are.  She will find those closest to her in stature, get quite close, press her little hand against her chest, lean in closely, announce her name, and promptly ask, “What’s your name?” to whoever is before her. While I’ve sat on the sidelines and watched my young kids play become more elaborate and interactive, I have also had to stop myself at getting too involved more than once.

One evening, as the sun had just begun transforming the sky into a tangerine hue, my daughter met a sweet girl close in age. As the two played so nicely, I focused in on my little guy a bit more. The girls squealed as they took turns riding a ride-on toy the girl had brought. Soon two older boys joined in. Laughter and excitement echoed from wherever they went, so I remained under the impression that all was well. Out of the corner of my eye, I saw a faceoff between the girls and boys. Nothing aggressive, just an evident pause in play. Then they were off again. As my husband passed by honking on his way home, I knew it was time for me to corral the kids, go home, and start dinner. As we sat down to our meal that night, my three-year-old disclosed, “The boys at the park were being rude.” I asked what they had said. “They called me and my friend bum-bums,” she shared. Of course, it was just toilet humour – a young child’s attempt at teasing. But, my mother-bear-hackles were certainly standing on end. “That’s not nice! You should have told Mama,” I insisted. Indifferent to my desire to protect her from an insult, she said “I said, ‘That’s bad.'” Then she turned to my husband and smiled, “I had fun at the park!” Admittedly, my blood was still boiling and my instinct was to fight for her, but I couldn’t ignore the fact she was teased for the first time that I know of and she nailed it. She addressed the issue and moved on. In her mind, that was it! It was done.

This week, we were at the park mid-morning. I had just found a bench in the shade to survey my toddlers. My daughter had just made her newest friend. Equipped with Disney Princess toys, the pair of girls climbed up on one of the play structures to seek refuge from the younger kids’ grabby hands. My son saw them, collected his huge box of chalk he had been playing with on the sidewalk, and almost teeter-tottered his way up to them. The girls, unimpressed with their uninvited younger guest, moved on. My son, determined, grabbed his heavy box of chalk and followed. If it weren’t for my mediation, they would have moved away from him a third time. Nevertheless, the girls’ body language indicated their true feelings about their imposed playmate. My little two-year-old sat, wide-eyed, not sure if he should be sad they didn’t want to play with him or happy that they hadn’t moved away. Then, a boy of about ten approached me, “Excuse me?” he asked, motioning to the girls, “If they don’t want to play with him, would it be okay if I did?” My heart melted and my eyes welled with tears. “Of course,” I exclaimed. My son brought his big box of chalk to the boy and the two sat in a cloud of coloured dust for nearly an hour. 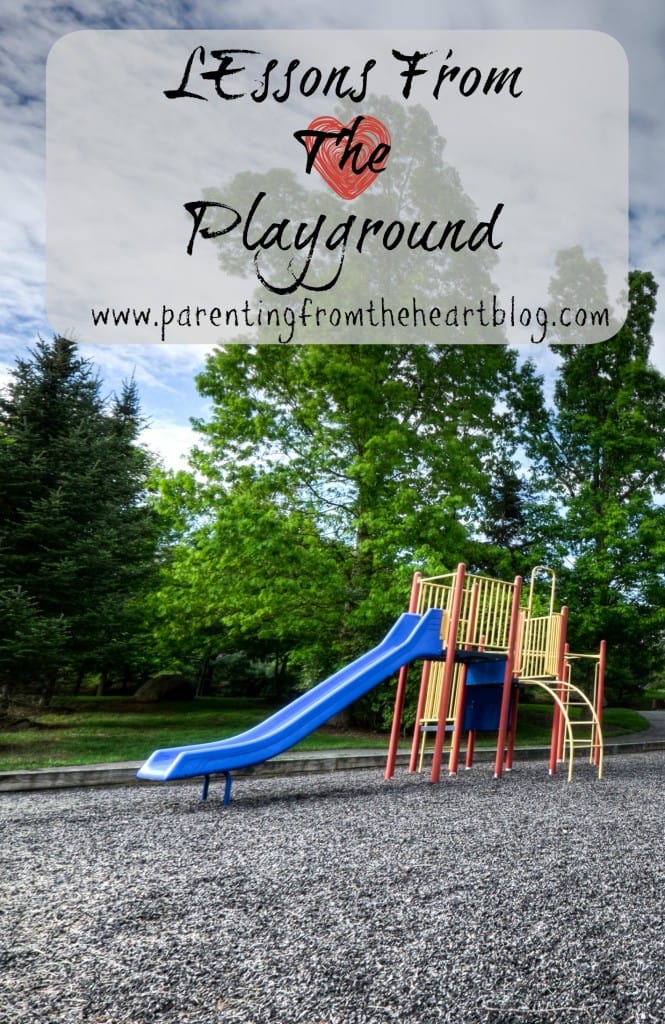 I’ve never wanted to be a helicopter parent, but there are times are fleeting moments where I want to fight my kids’ battles for them. I want the world to be as kind to them as they are to it. In staying by the sidelines just a little longer than my maternal instinct dictates, I have been shown that my children and the children around them are more competent and are more conscientious than I had thought. It seems with the right foundational skills, a bit of guidance, and allowing them the autonomy to navigate through playground politics, kids can figure out a lot on their own.

Previous Post: « Moving From The Inside Out
Next Post: A Letter To My Pregnant Self About Marriage »