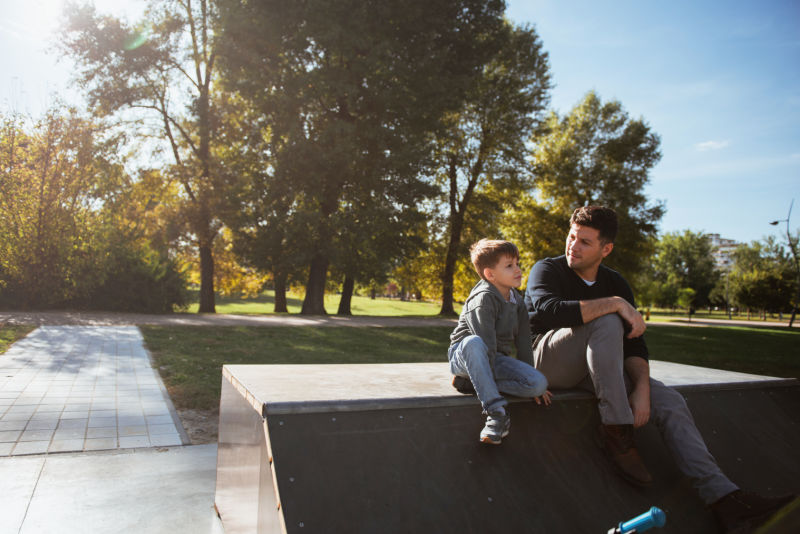 Inside: Many still believe in infants learning to self-soothe. Not only does research suggest this is not possible, but it also shows that secure attachment, resulting from responsive parenting, has far-reaching benefits.

“She’ll never learn to stand on her own two feet if you coddle her like that.”

The words came from one of two visitors staying with us from out of town. That day the couple had offered to take my kids to the Nature Museum. My then three-year-old was all-in! He wasted no time getting his velcro shoes and climbing into the rental car.

My four-year-old daughter was slower to warm up to the idea. Leaving me wasn’t easy for her at this stage of her life.

So I wrapped my arms around my girl and gave her the words she was struggling to say, “You don’t want to leave Mama.” With her head still nestled in the nape of my neck, she nodded.

As the initial fear of leaving me subsided, I urged her to go. “You can stay, but I have to go to Costco and clean the house. Everyone else is going to the Nature Museum. You can see the dinosaurs and play vet!”

Despite my coaxing, she opted to stay with me.

That’s when one of our well-meaning guests said those fateful words. At the time, I was more concerned with coaching my child than coming up with a good clap back. Even if I had said something, all I knew was that my daughter needed me and I wanted to support her. And honestly, that would’ve been reason enough. Now that I have more substantive knowledge of child development, I would have much more to say to that guest now.

Our visitor touched on a prevalent issue. The world is rife with misinformation about parenting. Though advice about self-soothing and not coddling is likely meant to help parents, it is not rooted in developmental research.

First, self-soothing is not a psychological construct.

“The reality is that self-soothing is a buzzword, a marketing tactic, a fugazi that is used to sell non-responsive sleep training as a solution to parental exhaustion while papering over lack of support – nothing more.”

The word self-soothing is likely a misinterpretation of the idea of self-regulation.

Self-regulation refers to overall calmness, appropriate emotional responses, and goal-directed behaviour. This ability doesn’t start to develop until late toddlerhood. This is because the emotional right brain is more dominant than the logic left from about 25 weeks gestation until the age of two.

Of course, infants can suck on their fingers and stop crying or roll over to get a better reach of their ball, but this is not sufficient evidence to prove they can soothe themselves when overwhelmed. From infancy and beyond, children need our help to regulate their emotions.

Though the untrained eye may think responding to a child’s emotional needs is coddling, it is not. Coregulation refers to the development of emotional regulation in conjunction with caregivers.

The research on co-regulation shows that mothers who are sensitive to the needs of their babies and respond with compassion and warmth have infants who tend to be calmer, soothed more readily and more curious and engaged.

As a mother and her child co-regulate, secure attachment develops. This has far-reaching implications for the child’s life.

“The attachment relationship shapes the ability of the baby to communicate not [only with] the mother, but ultimately with other human beings.”

Attachment, conceptualized by John Bowlby, is a system of biologically based behaviours designed to promote interactions and maximize survival.

For example, cooing, smiling, crying, and clinging are infant behaviours that promote closeness.

The more caregivers respond to their infant’s physical and emotional needs, the more they feel secure and develop a sense of trust.

Around the age of seven to 11 months old, infants of responsive parents start showing secure attachment. They start by showing a preference for one particular caregiver, but in time, they show multiple attachments beyond the primary attachment figure (for example, to other caregivers, grandparents, or older siblings).

Related read: Responsive parenting is crucial for development. This is why

In the case of the first, when infants begin to trust that their caregivers will respond reliably and warmly, they feel less stressed and more secure. The parent then becomes a secure base from which they can leave and explore. The second construct comes into play when the infant becomes overwhelmed or scared, she knows she can turn back to Mom or Dad who will act as her safe haven. Meaning that if the infant is scared or overwhelmed, he knows he can turn to his parent and his parent will soothe him.

Sadly not all infants experience responsive parenting. Because of this, there are different forms of attachment.

Building on John Bowlby’s work, Mary Ainsworth assessed infants’ attachment in her Strange Situation study. Mothers came into a room, interacted with an adult and left their infants for three minutes. Ainsworth gathered data on mother-infant interactions, separation, and reunion. This research showed that the majority of infants (approximately 60% exhibited secure attachment) while the other 40% either showed avoidant or anxious attachment.

In Ainsworth’s research, these infants cried the least and were the most indifferent to their parents returning to the room.

In Ainsworth’s study, these children cried the most, struggled to be soothed, and were the neediest. They tend to oscillate between anger and clinginess towards their mother.

This study and studies since this show that clinginess is the result of inconsistent not responsive parenting.

Related read: What is positive parenting and why does it matter?

These findings extend past infancy and young childhood – attachment has implications in teenagehood and beyond.

Though conventional wisdom suggests parents lose most of their influence over teens, a growing body of research shows this isn’t the case. In fact, teens’ secure attachment to their parents is very similar to that of infants and young children.

The difference is that the secure base is a mental representation. For example, an infant may look back to make sure Mom is still in the room and then continue exploring the environment. As a teen, the venturing out isn’t in a room close to where Mom is seated, but into the community and even the world.

Both secure base and safe haven are in the mind.

Teens think of how their parents will respond if they are in distress. A study examining attachment in high school students‘ found that securely attached kids were less likely to try drugs, binge drink, engage in risky sexual behaviour and have mental health problems.

In contrast, anxious attachment was associated with suicidality, drug use, and aggressive delinquent behaviour. But it doesn’t stop there.

Attachment security carries into adolescence through to adulthood.

In 1975, The Minnesota Longitudinal Study began collecting data on 267 first-time mothers in their third trimester and continues to follow these children.

The study began with 267 first-time. Assessments occurred at birth, 3 months, twice at six months, and twice at 12-months. Thereafter, researchers conducted assessments every 6 months until age 2 1/2 and yearly until children were in the 3rd grade.

The research is compelling.

Puig and colleagues looked at the relationship between attachment and health. They found that at age 32 year, anxiously attached infants had more health issues and inflammation than their securely attached counterparts.

Using the data from the Minnesota Longitudinal study, Girme and co-authors found that infant attachment predicted hyper or hypo responses to relationship conflict. The data was from ages 16, 20, 23, 26, and 35. 16-year-olds were only interviewed about friendship security.

And, as adults, anxiously avoidant infants:

Furthermore, a large body of research suggests that insecurely attached people are more likely to be chronically single. This research shows that attachment has far reaching implications for the entirety of people’s lives.

Secure attachment may sound like a tall order, but it’s not quite as lofty as it seems.

Before concluding this article, it’s important to note that attachment security only develops in imperfect parent-child relationships. In fact, research by Schore on the development of emotional regulation and secure attachment found the best parents are what he calls “good enough.” These mothers “got it right” about a third of the time. Meaning, the majority of the time moms missed a cue, responded late, or response didn’t fit what the infant wanted. However, what set them apart from other parents was their propensity to re-attune. They realized they didn’t get it right and tried again to respond in a way that worked for their infants.

In addition to the best parents not getting it right most of the time, it’s important to know it isn’t too late.

A growing body of research by Moretti and collegues shows that attachment interventions have a substantial impact on teens (including at-risk ones). The advice from this literature is not to be highly responsive like you would an infant. (Most teens don’t want their parents running to cuddle them every time they seem upset). Instead, a huge way parents can promote attachment security is how they approach conflict. Specifically, parents who approach disagreements calmly, validate feelings, and collaboratively problem-solve are strategies that are particularly beneficial.

In conclusion/ the TLDR

Though there many believe infants can self-soothe and children should learn independence by parents should ignore their distress, this is not the case. Extensive research has been done on attachment over the course of human development that shows secure attachment leads to greater independence and emotional regulation.

As I look back to that day, my daughter didn’t go to the Nature Museum and think how far she’s come. Of my three kids, she remains the slowest to warm up, but she continues to take on new experiences and make great strides. When compared to her brothers, it has taken more time to get the courage to speak to a cashier on her own, ride her bike around the neighbourhood, or knock on a friend’s door without someone by her side. It takes her more time, but she gets there. In fact, last night she asked if she could go to a sleepaway camp which shows to us how much more independent she is now.

Related reading you may find helpful

Previous Post: « These Research-Backed Strategies Will Make You a Happier Parent
Next Post: “Aren’t they just bad?” Debunking common myths about strong-willed children »