Get a free printable with these tips at the bottom of this post.

Sibling rivalry eroded the joy of parenting my kids.

Of course, I loved them unconditionally loved them and still had fun with them.

But before the going got tough, life was different.

When I drifted off each night, I would excitedly think of what we would do the next day. In the morning, I would wake to see their big sparkling eyes, antsy to seize the day with them.

As their fighting became all-consuming, that started to change…

Making coloured cloud dough or driving to the kids’ museum turned into a saga of poking, complaining, and hurling the occasional shoe. I was less their mother and more a referee. No matter what reasoning or approach I tried, I was getting nowhere.

They screamed words of frustration.
“I said, ‘Leave me alone!'”
“I was here first!”
They hit, kicked and pinched one another. There were tears. So many tears. 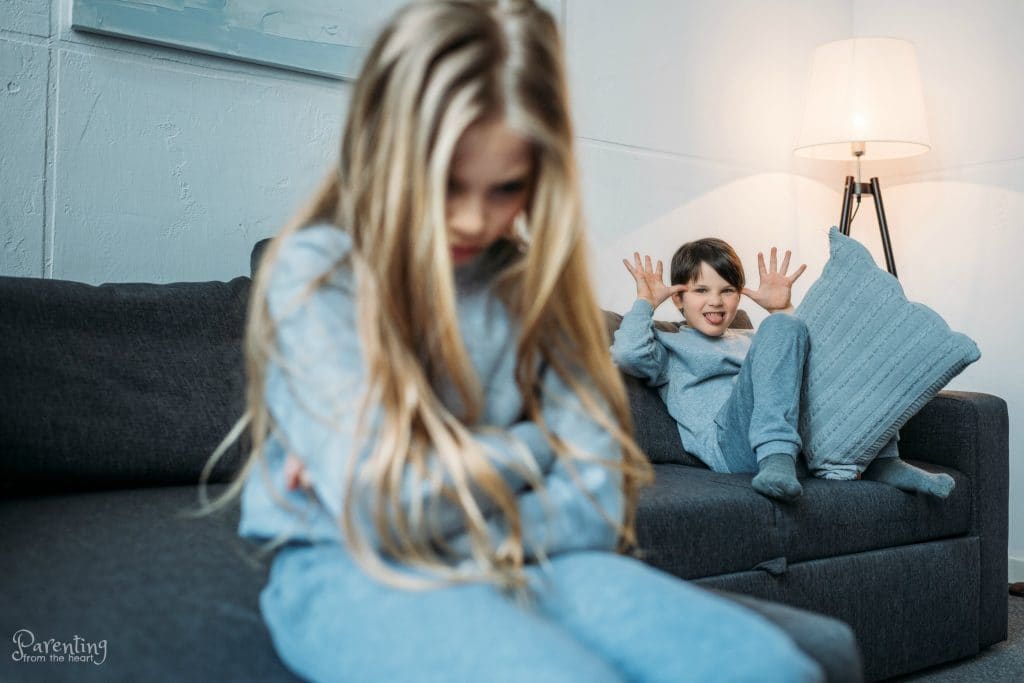 My tension mounted. Each word of discipline I said was through gritted teeth.

“Hands to self, please.”
“Get away from each other.”
“Don’t you dare put her Shopkins in the garbage!”

Until my husband came home at night, it felt as though variations of those phrases were all I said. Discouraged and frustrated, I went into survival mode. In an almost robotic fashion, I would separate them, voice a version of one of the phrases above, and do my best not to go stark raving mad.

Related resource: Download a cheat sheet to help you stay calm in the heat of the moment.

I resigned myself to the belief that, because my kids are only about a year apart, their sibling rivalry was inevitable.

The sibling rivalry solutions we weren’t ready for.

One night, I posted in a Facebook parenting group. Admittedly, the post was written in vain. I had hoped other parents would see my post and just simply say, “It’s brutal for us too.” Instead, there were several insightful tips.

My two favourites were:

The only problem was my children were fighting more like dogs trying to assert dominance than two children in a heated disagreement. So I couldn’t enact these strategies yet. 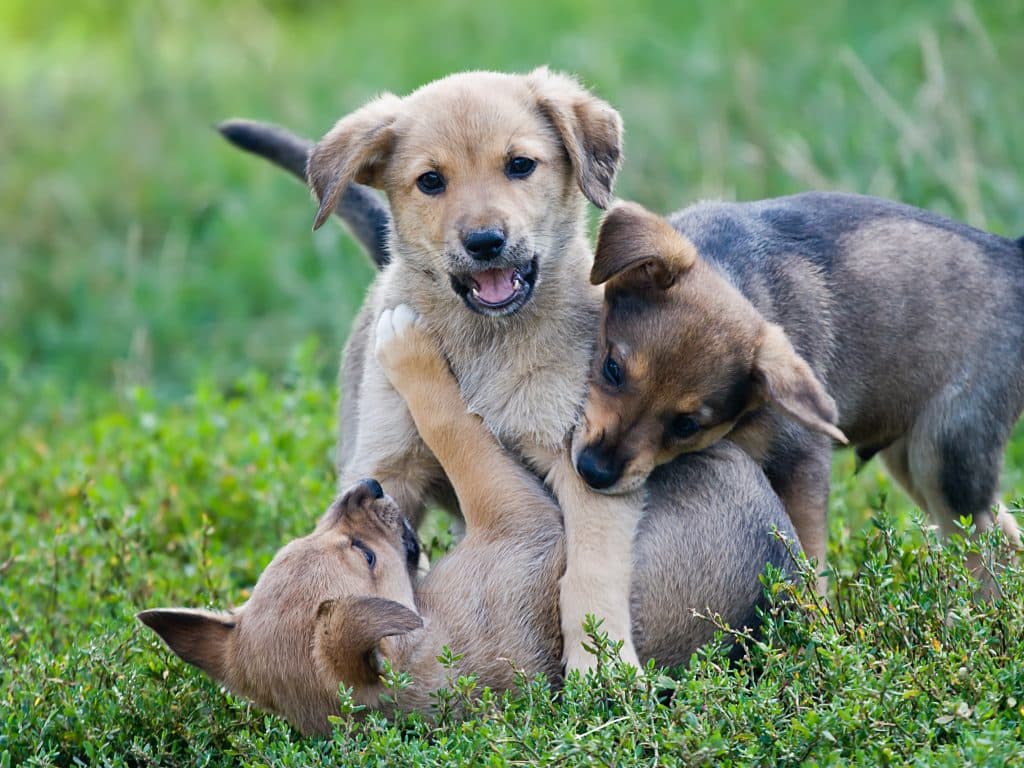 Often my kids fighting was reminiscent of puppies trying to assert dominance.

This post contains affiliate links for your convenience. The price you pay is the same. However, I can receive a small commission.

This summer, I came across a couple of viral Facebook posts about how kids shouldn’t have to share their toys.

When I reflected on my own family, I realized that the bulk of my kids’ grievances with one another came down to feeling territorial. Whether they fought over an area of the family room or who got the red hockey stick, they want to lay their respective claim to everything. The problem with the Facebook posts is the advocated approach failed to consider items that don’t belong to one child. For instance, in the context of our home, the sidewalk chalk paint or the Wheels on the Bus board belong to both my older kids.

Then it dawned on me.

I decided to stop trying to impose a set amount of time my son could have the singing Maui doll before my daughter could have her turn. Instead, I told my daughter to ask, “Can I have Maui when you’re done?” My son responded, “Yes.”

This was almost magical because:

Suddenly, my two squabblers had (almost) nothing to argue over. Aside from the fact that this strategy works so well, I also love that it translates well into the grown-up world. If I want to use the phone and my husband is on it, I wouldn’t say, “Give me the phone right now,” or “I’ve set the timer for five minutes.” I would ask to use the phone when he’s done.

Finally, the fierce and unrelenting desire to possess everything the other had had stopped. But… that didn’t mean my kids had stopped fighting entirely.

Related reading: Here are Effective Strategies to Get Your Kids to Listen

The other missing piece.

Fighting over resources was only part of the sibling rivalry issue. When my son decided to push his sister’s buttons or my daughter attempted to dictate what my son should do, their fighting could still snowball.

The biggest change came when I picked up the book, How to Talk so Kids Will Listen: How to Listen so Kids Will Talk. Just reading the first portion has been a game changer. The strategy the book starts with is simple. The authors advise readers to focus on and listen to their children when they have a problem. That’s it.

When applied to sibling rivalry, it looks like this:

If the situation remains unresolved, I coach my children on how to express their feelings to each other. I also coach the child who’s listening to show she understands. Then she gets her turn. Read more about this here.

Related reading: When Children Fight, This is the Opportunity You Won’t Want to Miss 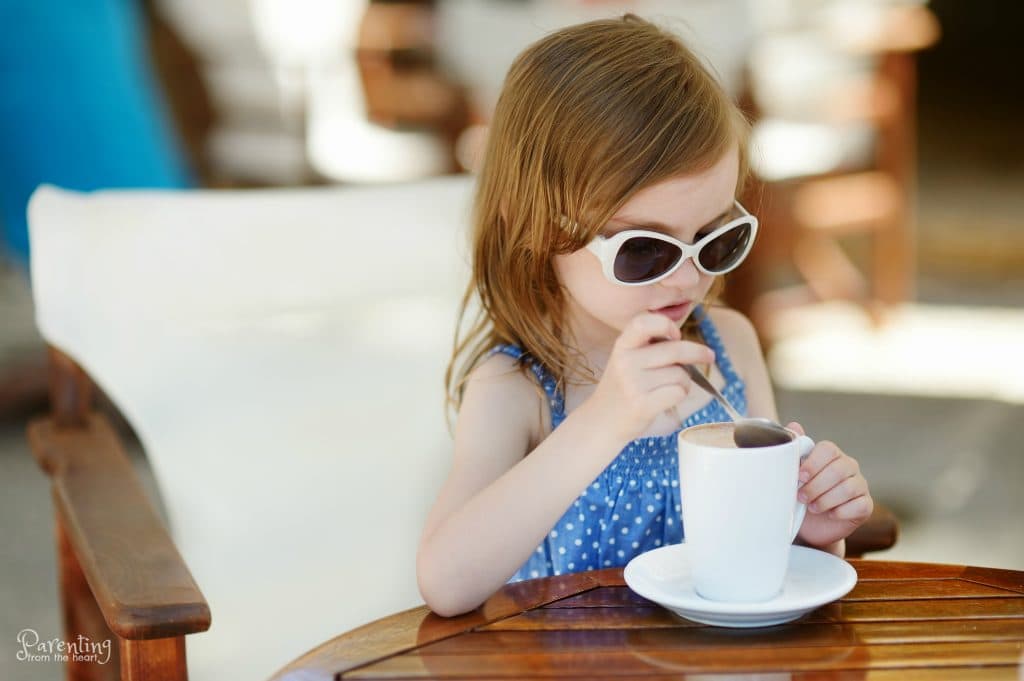 Sneaking in one-on-one time has done wonders for us.

The  whipped cream on top.

To improve all of the relationships, my husband and I have been prioritizing one-on-one time with each of our kids. My husband will take one kid. I will take the other. Often it’s been to do something impromptu like going to the grocery store. After getting what we need, we meander through the toy aisle. Or we sit at Starbucks and slowly sip kids’ drinks with extra, extra whipped cream. When our children feel connected and included, they are more willing to cooperate and listen.

How to solve sibling rivalry: Conclusion

Now that my kids felt respected, listened to and connected with, our whole family is happier and less tense. And I can finally use the strategies mentioned in that Facebook group. I now wake looking forward to starting the day with my kids. 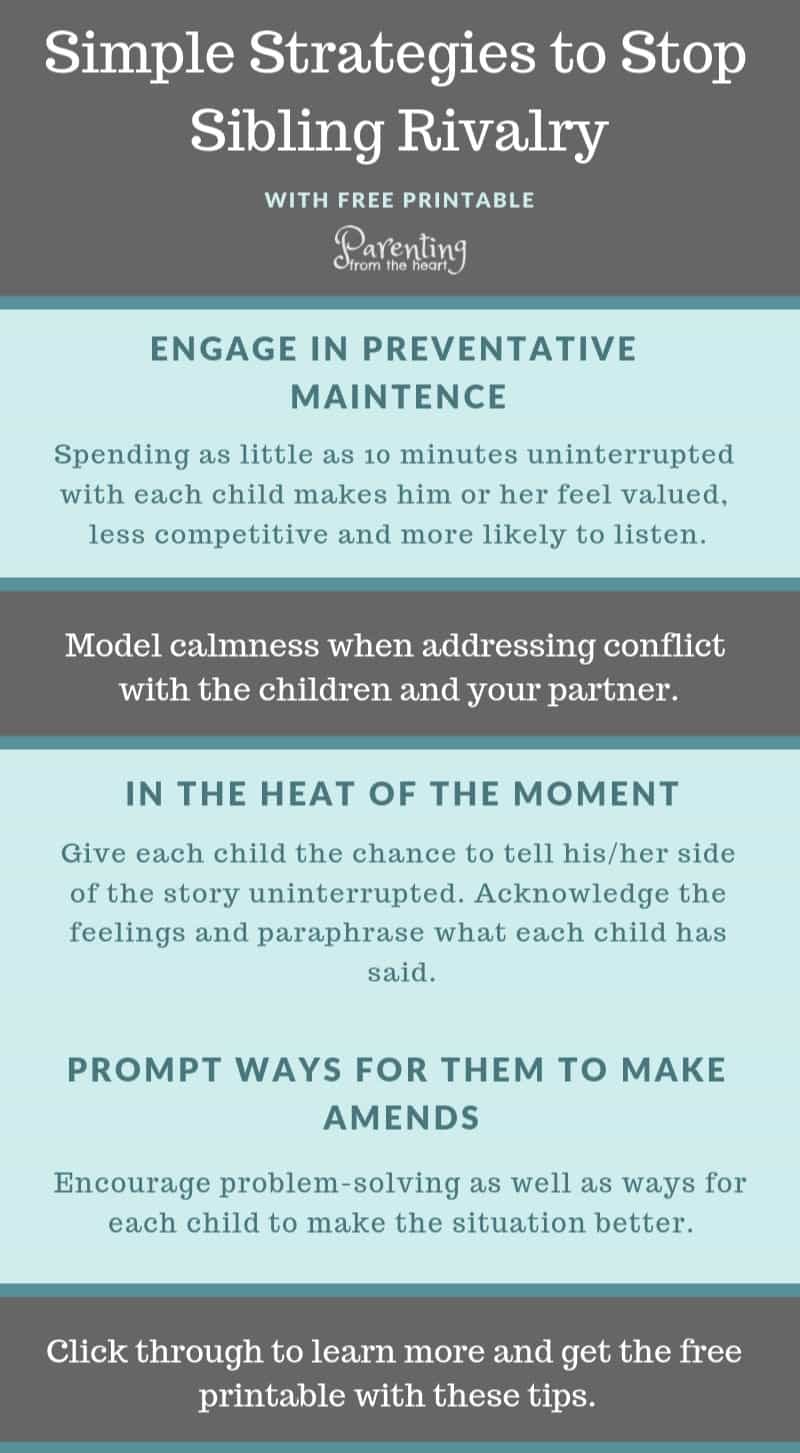 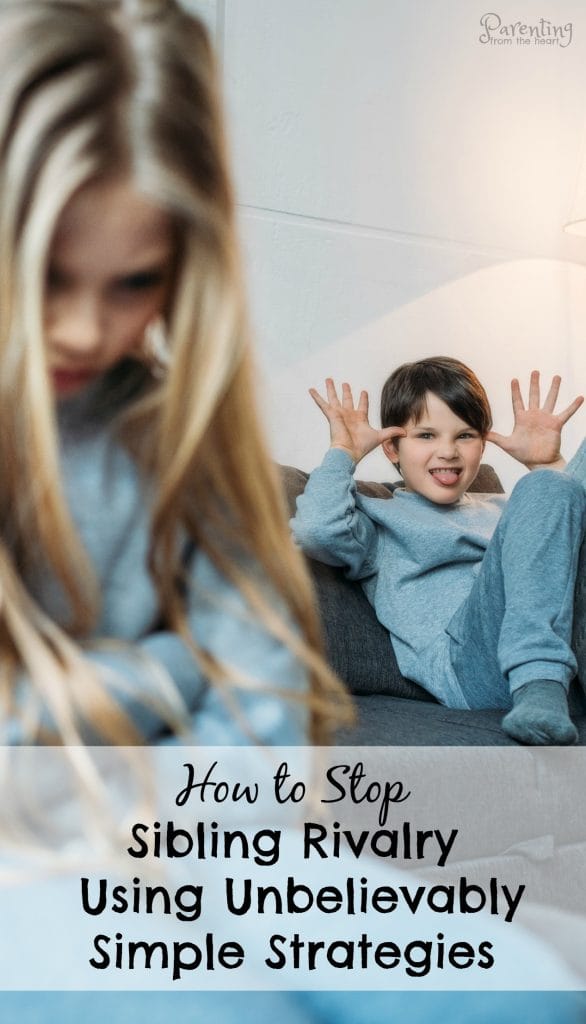 When Children Fight, This is the Opportunity You Won’t Want to Miss

How to Discipline a Child: Why Science Says This is the Best Approach

Stop Yelling at Your Kids Using One Simple Strategy

How to get your kids to listen without yelling

Download a printable with these tips for sibling rivalry