You are here: Home / Parenting Young Children / Why white parents need to talk to their children about privilege and racism 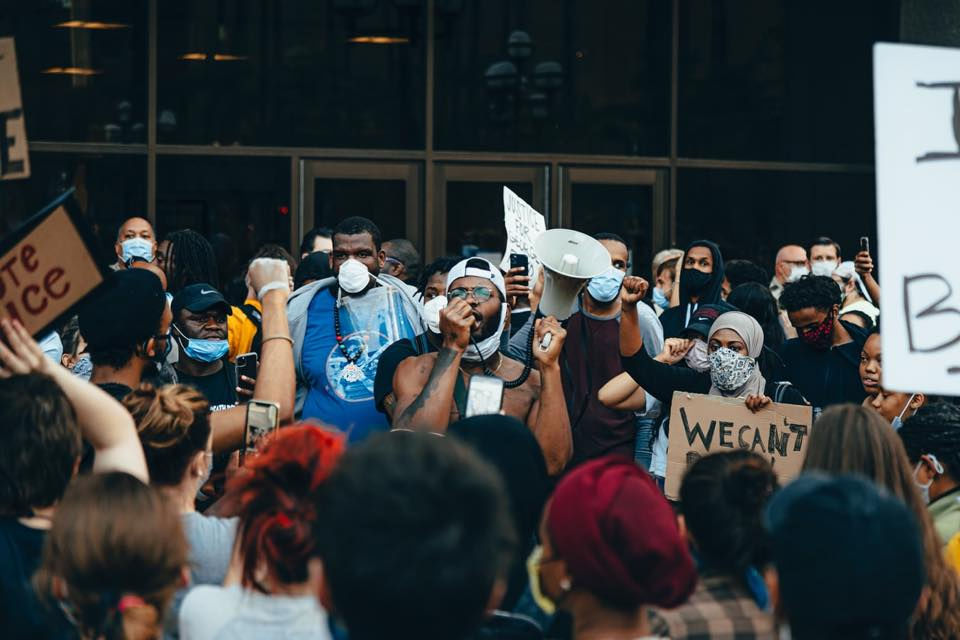 It’s been one week since a police officer knelt on George Floyd’s neck killing him.

Protests and riots have broken out all over America as people call for black lives to hold the same value as those of whites. The news is littered with images of public buildings on fire in Minniapolis, police pushing back peaceful protestors in D.C. and rioters taking bags of shoes from Footlocker. No matter how well we shelter our children, the all-consuming nature of these demonstrations make them hard to avoid. Chances are, your children have questions about what’s going on.

If you’re like me, you may have previously avoided conversations about race with your children.

For three years, we lived across the street from people who had immigrated from Jamacia. Their sons were my two oldest children’s best friends. Because skin colour and ethnic origin didn’t come up, I avoided giving meaning to something that was completely irrelevant to them.

For the three years we lived in that neighbourhood, my daughter had two teachers of Haitian decent and one whose family had immigrated from Africa. With respect to her teachers, my daughter never asked questions or made references to skin pigmentation or heritage and so I held back and let her experience unfold as it did.

My black friends told me I should be talking about racism with my kids.

I remember distinctly the first time a black friend suggested I have regular conversations with my children about race and privilege.

For one, I thought I was doing the right thing.

Two, I didn’t know how to broach the subject appropriately and feared labelling race would reinforce perceived differences.

First of all, I regularly used the time we spent on longer drives to discuss hypothetical moral delimmas with my children. For instance, I often depict situations that might occur on the playground and ask my kids how they respond. We often talk about when to stand up for others, when to walk away from a conflict that isn’t getting resolved or when tell an adult if someone’s safety is in jeopary.

This was a perfect time to talk about what racism might look like in our lives and how to stand up against it and I wasn’t doing it.

Secondly, and with respect to my children’s innoncence, I remembered that there are countless times adults in their lives have to explain potential risks and run drills. For instance, at their schools, they have to do fire, earthquake and lockdown drills. We talk about poverty and misfortune in age appropriate ways. We have talked about disabilities and the struggles and blessings that come with them. Based on this, avoiding conversations about racism and white privilege didn’t make a whole lot of sense.

Research: Being colourblind doesn’t work. Acknowledging our differences does.

As my schooling brought me deeper into the research of social psychology and intergroup relations, it was evident how problematic a colourblind approach was. Colourblind ideology strives to treat everyone equally by ignoring race and cultural differences in favour of seeing each person as the unique person that they are.

Though this may sound great in theory, it is inherently flawed.

Why can’t we just see everyone as an individual?

The mind naturally groups information into similar categories. These schemas act as frameworks for how we interact with the world. At a young age, we start to group people based on context, profession, gender, and other physical characteristics. As just an example, watch how a school-aged child approaches a younger child versus a adult. She understands that you don’t treat people of varying ages identically.

Every person has a vast number of group identities. For example, I am a mother, daughter, wife, student, writer, customer, client, patient, female, white and of middle income. Most group categories are benign. Like, when I get on a public bus, I greet the bus driver as I do all other bus drivers. In turn, she will greet me as any other commuter. It’s only if we develop a rapport that our interaction becomes more individualized.

A given situation dictates what group membership becomes most salient. For instance, at kindergarten orientation, I am grouped as a parent. And, at university, I’m seen as a student. Most group memberships are banal and the vast number of intergroup group relations are neutral-to-positive.

However, it gets more complicated when our group membership determines the advantages and distadvantages in society.

Privilege occurs when one demographic receives societal privileges at the expense of another demographic. In this context, we are exploring white privilege, though gender, sexual orientation, ability/disability, and socioeconomic status are all demographics people do not choose that impact their treatment within society. Black people experience oppression in the face of white privilege. In many contexts, they are treated as second-class citizens.

In the context of white privilege versus black oppression, consider these statistics:

Another ah-ha moment – Being able to avoid talking about racism a sign of my own privilege.

My black friends had to talk about race, police shootings, and the system being stacked against them to help keep their children safe. Meanwhile, I was able to avoid these talks because my privilege largely acted as a buffer against these events.

A great visual for this is the video below. In it, a high school class is told they are going to race across a field. Each of them line up shoulder-to-shoulder. They are told first person to cross will win a $100 bill. Before they state, the gym teacher instructs them to take two steps forward as he lists off different factors that are life advantages. For instance, if they lived in a two-parent household, if didn’t have to worry about whether or not there would be food on the table, and if they didn’t have to help with bills, they could take two steps forward.

The majority of students who remained close to the starting line were black, while all of the students who were able to take two steps forward on each measure were white. Of course each person can run to the finishline as hard as possible, but the white teens had the greatest probability of winning.

To ignore the adversity is to act as though the playing field is fair.

As a result, colourblindness lends itself to more racism. Viewing everyone as being on an equal playing field makes differences and disadvantages seem earned.

Consistent with the above-mentioned research, Winkler, an associate professor at the University of Wisconsin-Milwaukee, states that children make sense of the world by organizing information about people like they would shapes and colours.

“Not talking about race causes children to come to a lot of harmful, problematic and factually inaccurate conclusions,” sociologist, Dr Hagerman says. When parents avoid conversations about race, children tend to fill in the gaps. They may see black people’s hardships as earned (9).

So how do we talk to children about racism, privilege and oppression?

There is no one right way to talk about racism. And, just like many facets of parenting, conversations about privilege and oppression should be ongoing. We won’t get it right every time or do it perfectly. It helps to perspective take, read, and ask others for insights.

The more we talk about social injustice, the better we will likely get.

In my own home, we talk about standing up for what’s right, what racism might look like amongst kids and how to take a stand.

While this may not seem consequential, research shows that allies who are clear about their support have a positive impact (10). Specifically, when friends and associates express that they side with minorities, those minorities are more likely to advocate for themselves.

A final note about privilege and racism

Talking about privilege and racism can feel uncomfortable. We don’t want to get it wrong, reinforce damaging perceptions, or strip our children of innocence. However, saying nothing is far more detrimental. Doing so can cause further harm through pretending differences don’t exist, making minorities feel unseen and reinforcing racism.

Since George Floyd’s death the protests, my kids have asked a number of questions. I explained that rioting can happen when people feel pushed down over and over again. We have talked about how judging someone based on their hair colour is like judging them on their eye colour or hair colour. It isn’t something that you choose. And, we talked about how our hearts are broken that any of this is happening.

Over the past few years, they understand more and have asked more questions.

I have become more comfortable, though I know I won’t always have the answers. We will learn together. Whenever we can, we will show our support and stand behind people who are oppressed.

My prayer is that the more we do this, the closer our day will get to healing.

Related reading you may find helpful

How to raise children who want to do what’s right

The best and worse consequences for moral development

Teach your child to be an advocate for change

How to show up for black women

Your kids aren’t too young to learn about racism

Previous Post: « Crisis School: How to find peace of mind when so much is uncertain
Next Post: The stress-free way to potty train your toddler »